I'm organizing another secular solstice, which has me thinking about where to pitch songs so the most people will feel comfortable. I found several people saying that range of C to C generally works well with untrained voices, and if they had said something weird like Db-E I might have believed them, but C-C is so simple I'm skeptical.

I tried looking for papers and didn't find anything, so I ran a survey. I linked people to wtuner and asked them what were the highest and lowest notes they could happily sing. I got thirty one responses: 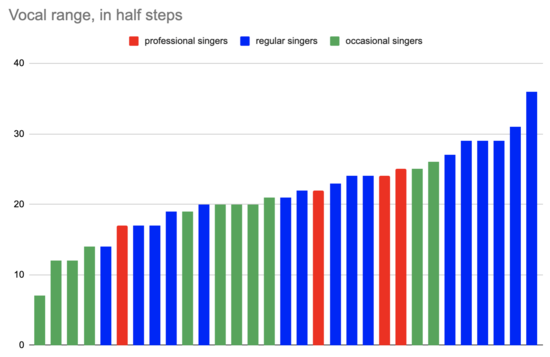 The median happy-singing range was 21 half-steps, which is a bit under two octaves. For example, G2 to E4. Here are the actual notes: 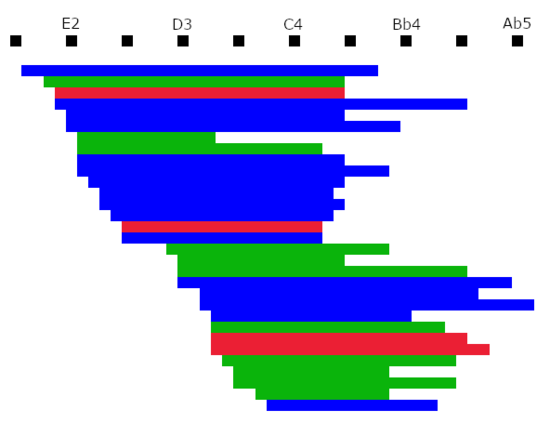 Some of these responses are a bit dubious: one person gave a happy range from A3 to E4 (eight notes). Another response gave a range from F2 to F3, but the response with the next lowest high note gave D4 (nine notes higher). One possibility is people interpret "happy" in a range of ways, where some people are giving the limits of their range while others are just giving where they feel their voice sounds best?

Taking the survey literally, however, we can calculate the number of people who would be unhappy with a given range of notes: 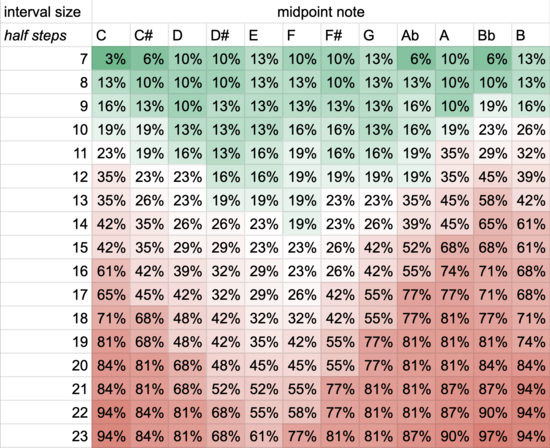 This would say "Happy Birthday", which has a one-octave range and starts on the fifth, would work best in G, Ab, or A, and worst in D (which would center it on Bb).

Here are the centers of people's ranges: 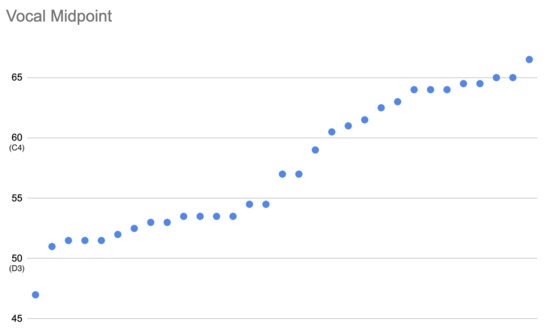 There's one group with a midpoint around F3, and then a less well defined group with a midpoint just under an octave higher, around Eb4. I suspect this is related to gender, though I didn't ask about that on the survey. [1] What makes centering on ~E work well, then, is probably that low voices can do Bb2-Bb3, while higher voices can do Bb3-Bb4. This is also good for having a full sound, because the voices are spread over two octaves; when you do the opposite and pitch it E-E, a large fraction of people are in the same E3-E4 octave.


[1] Phrasing questions about gender is hard, especially when you are mostly interested in one aspect (in this case, testosterone giving lower voices) which may not be central to someone's gender identity. I couldn't easily figure out how to phrase a question in a way I thought people were likely to be ok with, and I wanted to get the survey out, so I didn't include one.