This post is a long and graph heavy exploration of a  tiny toy neural network.

Suppose you have some very small neural network. For some inexplicable reason, you want to make it even smaller. Can we understand how the network behaviour changes when some nodes are deleted?

The network, and how it was trained.

Given that the model only has 2 inputs, we can plot the model to get a good idea of what it is doing. The network was only trained on inputs within the [−1,1] square, but out of distribution behaviour can be interesting, so it is visualized on the [−2,2] square. The circle which the network is trained to approximate is shown. In the upper plot, yellow represents the networks certainty that the point is inside the circle, and navy blue, as certainty that a point is outside the circle. The colour scheme  shown was chosen by whoever chose the defaults on the matplotlip.pyplot.imshow library.

Lets analyse the loss (as measured by sparse categorical cross-entropy)

We can let each node exist independently with a probability p , and plot the probability density function of the resulting.

The following code runs the network with a random subset of the nodes removed, and saves the losses to file.

And then the result is loaded and plotted to create the plot below. Note that the lines are smoothed using a Gaussian kernel of width 0.03. This value is enough to make sure the graph isn't unreadably squiggly, but leaves the structure of the PDF. 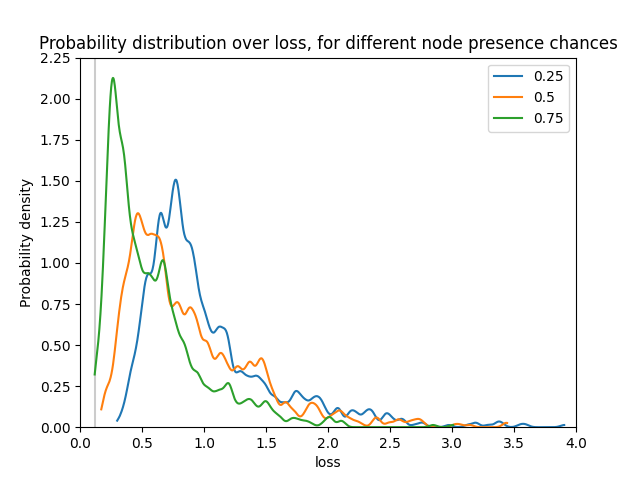 To consider the hypothesis that the loss is log-normally distributed, lets see the same data, but with the logarithm of the loss.

If the data was perfectly log-normally distributed, the plot above would be a bell curve. The bell curves of best fit are shown for comparison. I would say that these curves look to be pretty close to bell curves, and the variation could well be written off as noise.

Here is a table of the means and standard deviations of those bell curves.

Even if the small deviations from the (dotted line) bell curves isn't noise, it looks like assuming a log-normal distribution is a reasonably good approximation, so I will be doing that going forward.

Gradients of the loss

Why? Well these gradients can be easily computed by back propagation, and they could give insight into the structure of the network.

We can see that the gradients tend to be more pointy topped and heavy tailed than their bell curves predict.

The table of means and standard deviations

In the previous section, we considered that log loss had a nicer distribution. What is the gradient of log loss doing?

This means we can find ∂loss∂bi  just by dividing the gradient of the loss by the loss.

The only really surprising thing about the above graph is the consistent trough at 0.

Is that node on

One hypothesis we might form is that we are observing the sum of 2 different distributions, each with a single peak.

Lets take the data for Prob=0.5. Each neuron is equally likely to be present or removed.

If f is a function that takes a list of 1's and 0's, representing the presence or absence of each neuron, and returns the log loss, then the i th component of the gradient is

An obvious distinction to make here is if bi is 0 or 1.

bi=0 corresponds to looking at a node operating at 0% (ie turned off) and asking if the network would do better if the node was at 1% instead.

bi=1  corresponds to looking at a node operating at 100% (ie turned on) and asking if the network would do better if the node was at 101% instead.

Ok. That wasn't quite what I expected. Lets split this up by neuron and see how that affects the picture.

At a glance, some of these plots look smoother, and others look more jagged. For example, neuron 11 has smooth looking curves, and neuron 4 has more jagged curves. Actually, both curves are still being smoothed by a Gaussian kernel of width 0.03. Inspecting the axis, we see that the gradients on neuron 11 are actually much smaller. Some neurons just don't make as much of a difference.

How much does N flips matter

We can visualize this process.

Here is a cube with edges labelled with coordinates. Each corner of the cube has a list of 1's and 0's which represents a way some nodes could be missing. (Of course, the network being visualized has 20 nodes, not just 3, so imagine this cube, but 20 dimensional.) We start by picking a random corner, and drawing the red line, which goes once in each direction.

There are N=20 red arrows, meaning 21 values for the loss at the endpoints.

The distribution over paths is symmetric about reversal.

The heat map show the covariance matrix between log losses along the paths.

The turquoise line on the graph beneath shows the covariance between the log loss at start of the path, and the log loss along the path. (In distance from start).

The pink line shows the covariance of log loss at the end of the path, and log loss along the path, measured in distance from the end.

These should be identical under symmetry by path reversal. And indeed the lines look close enough that any difference can reasonably be attributed to sampling error.

This  graph shows that it takes around 5 or 6 node-flip operations before the correlations decay into insignificance.

I suspect that a pruned network scores well when its nodes balance out, their being equally many nodes focussing on the top, bottom, left and right of the network.

So far, all considerations of the gradients are averaged over a test sample. But the gradient of the loss is well defined at every point.

Here is a heatmap of gradient of loss for each node.  (Without pruning) 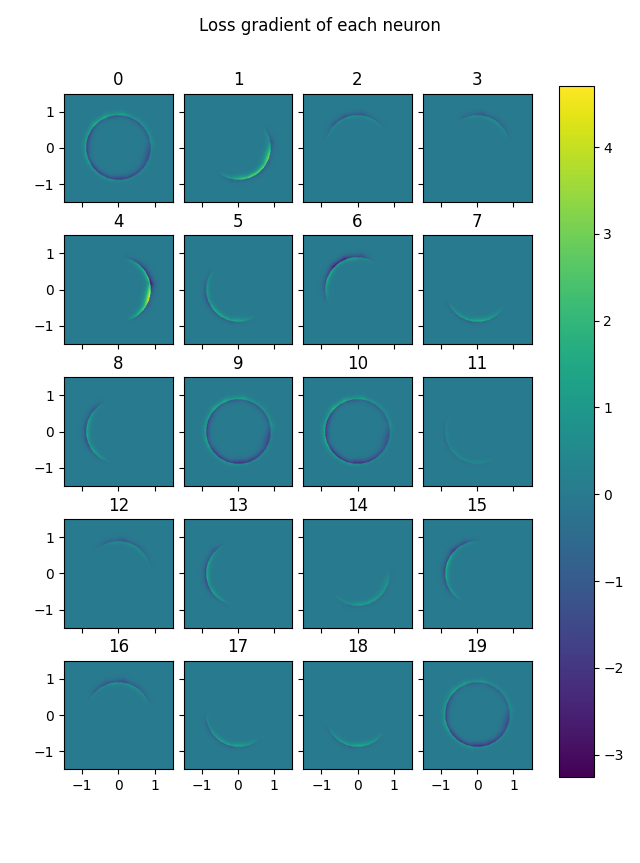 Blue represents a part of the solution space where a node is lowering the loss. If the network is confidant in its predictions one way or the other, then a marginal change to the neurons has a negligible effect on loss. The places where the network is uncertain are the annulus around the boundary circle. Thus the mid blue/green of 0 is seen away from the boundary circle.

Here is a plot of the loss, showing most of the predictive loss occurs around the edge of the circle.