Intelligence ExplosionReading GroupAI TakeoffAI
Personal Blog
Superintelligence 6: Intelligence explosion kinetics
Summary
Notes
4. How much difference does attention and funding make to research?
5. Other writings on recursive self-improvement
How to proceed
No comments

This is part of a weekly reading group on Nick Bostrom's book, Superintelligence. For more information about the group, and an index of posts so far see the announcement post. For the schedule of future topics, see MIRI's reading guide.

Welcome. This week we discuss the sixth section in the reading guide: Intelligence explosion kinetics. This corresponds to Chapter 4 in the book, of a similar name. This section is about how fast a human-level artificial intelligence might become superintelligent.

This post summarizes the section, and offers a few relevant notes, and ideas for further investigation. Some of my own thoughts and questions for discussion are in the comments.

There is no need to proceed in order through this post, or to look at everything. Feel free to jump straight to the discussion. Where applicable and I remember, page numbers indicate the rough part of the chapter that is most related (not necessarily that the chapter is being cited for the specific claim).

1. The argument for a relatively fast takeoff is one of the most controversial arguments in the book, so it deserves some thought. Here is my somewhat formalized summary of the argument as it is presented in this chapter. I personally don't think it holds, so tell me if that's because I'm failing to do it justice. The pink bits are not explicitly in the chapter, but are assumptions the argument seems to use.

Do you find this compelling? Should I have filled out the assumptions differently?

2. Other takes on the fast takeoff

It seems to me that 5 above is the most controversial point. The famous Foom Debate was a long argument between Eliezer Yudkowsky and Robin Hanson over the plausibility of fast takeoff, among other things. Their arguments were mostly about both arms of 5, as well as the likelihood of an AI taking over the world (to be discussed in a future week). The Foom Debate included a live verbal component at Jane Street Capital: blog summary, video, transcript. Hanson more recently reviewed Superintelligence, again criticizing the plausibility of a single project quickly matching the capacity of the world.

Kevin Kelly criticizes point 5 from a different angle: he thinks that speeding up human thought can't speed up progress all that much, because progress will quickly bottleneck on slower processes.

Others have compiled lists of criticisms and debates here and here.

3. A closer look at 'crossover'

Crossover is 'a point beyond which the system's further improvement is mainly driven by the system's own actions rather than by work performed upon it by others'. Another way to put this, avoiding certain ambiguities, is 'a point at which the inputs to a project are mostly its own outputs', such that improvements to its outputs feed back into its inputs.

The nature and location of such a point seems an interesting and important question. If you think crossover is likely to be very nearby for AI, then you need only worry about the recursive self-improvement part of the story, which kicks in after crossover. If you think it will be very hard for an AI project to produce most of its own inputs, you may want to pay more attention to the arguments about fast progress before that point.

To have a concrete picture of crossover, consider Google. Suppose Google improves their search product such that one can find a thing on the internet a radical 10% faster. This makes Google's own work more effective, because people at Google look for things on the internet sometimes. How much more effective does this make Google overall? Maybe they spend a couple of minutes a day doing Google searches, i.e. 0.5% of their work hours, for an overall saving of .05% of work time. This suggests their next improvements made at Google will be made 1.0005 faster than the last. It will take a while for this positive feedback to take off. If Google coordinated your eating and organized your thoughts and drove your car for you and so on, and then Google improved efficiency using all of those services by 10% in one go, then this might make their employees close to 10% more productive, which might produce more noticeable feedback. Then Google would have reached the crossover. This is perhaps easier to imagine for Google than other projects, yet I think still fairly hard to imagine.

Hanson talks more about this issue when he asks why the explosion argument doesn't apply to other recursive tools. He points to Douglas Englebart's ambitious proposal to use computer technologies to produce a rapidly self-improving tool set.

Below is a simple model of a project which contributes all of its own inputs, and one which begins mostly being improved by the world. They are both normalized to begin one tenth as large as the world and to grow at the same pace as each other (this is why the one with help grows slower, perhaps counterintuitively). As you can see, the project which is responsible for its own improvement takes far less time to reach its 'singularity', and is more abrupt. It starts out at crossover. The project which is helped by the world doesn't reach crossover until it passes 1. 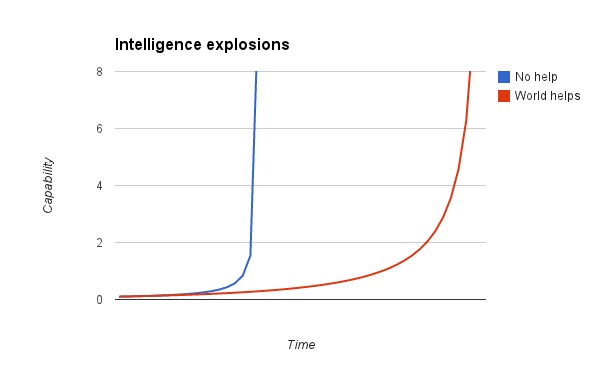 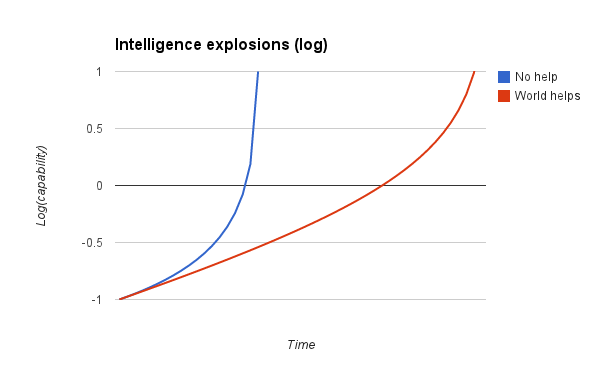 4. How much difference does attention and funding make to research?

Interest and investments in AI at around human-level are (naturally) hypothesized to accelerate AI development in this chapter. It would be good to have more empirical evidence on the quantitative size of such an effect. I'll start with one example, because examples are a bit costly to investigate. I selected renewable energy before I knew the results, because they come up early in the Performance Curves Database, and I thought their funding likely to have been unstable. Indeed, OECD funding since the 70s looks like this apparently:

The steep increase in funding in the early 80s was due to President Carter's energy policies, which were related to the 1979 oil crisis.

This is what various indicators of progress in renewable energies look like (click on them to see their sources): 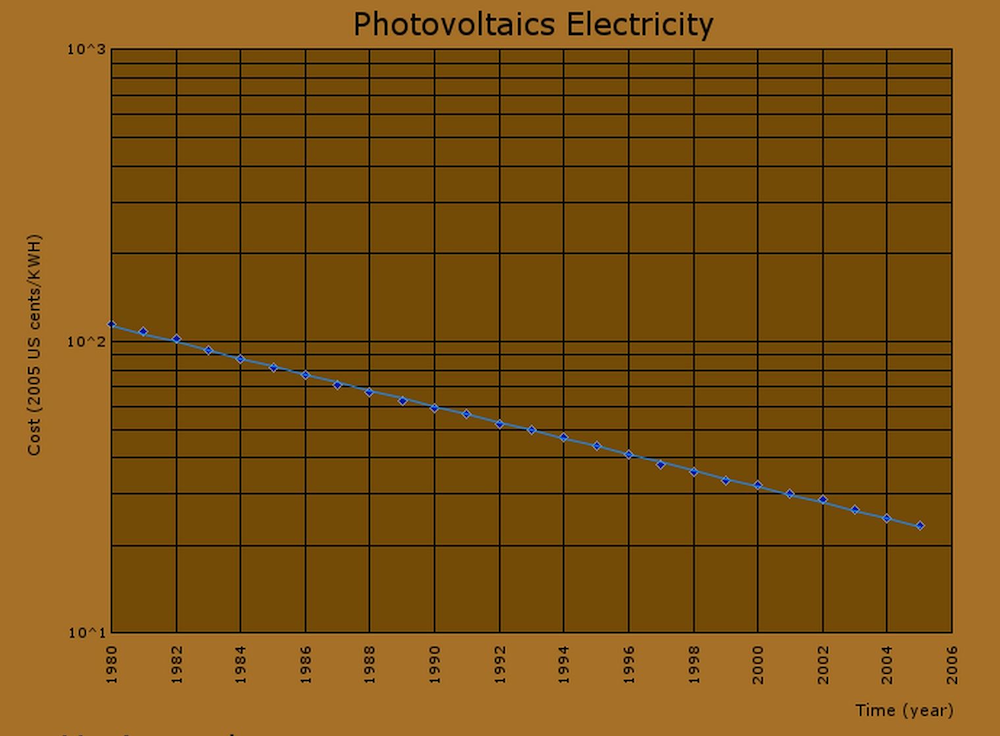 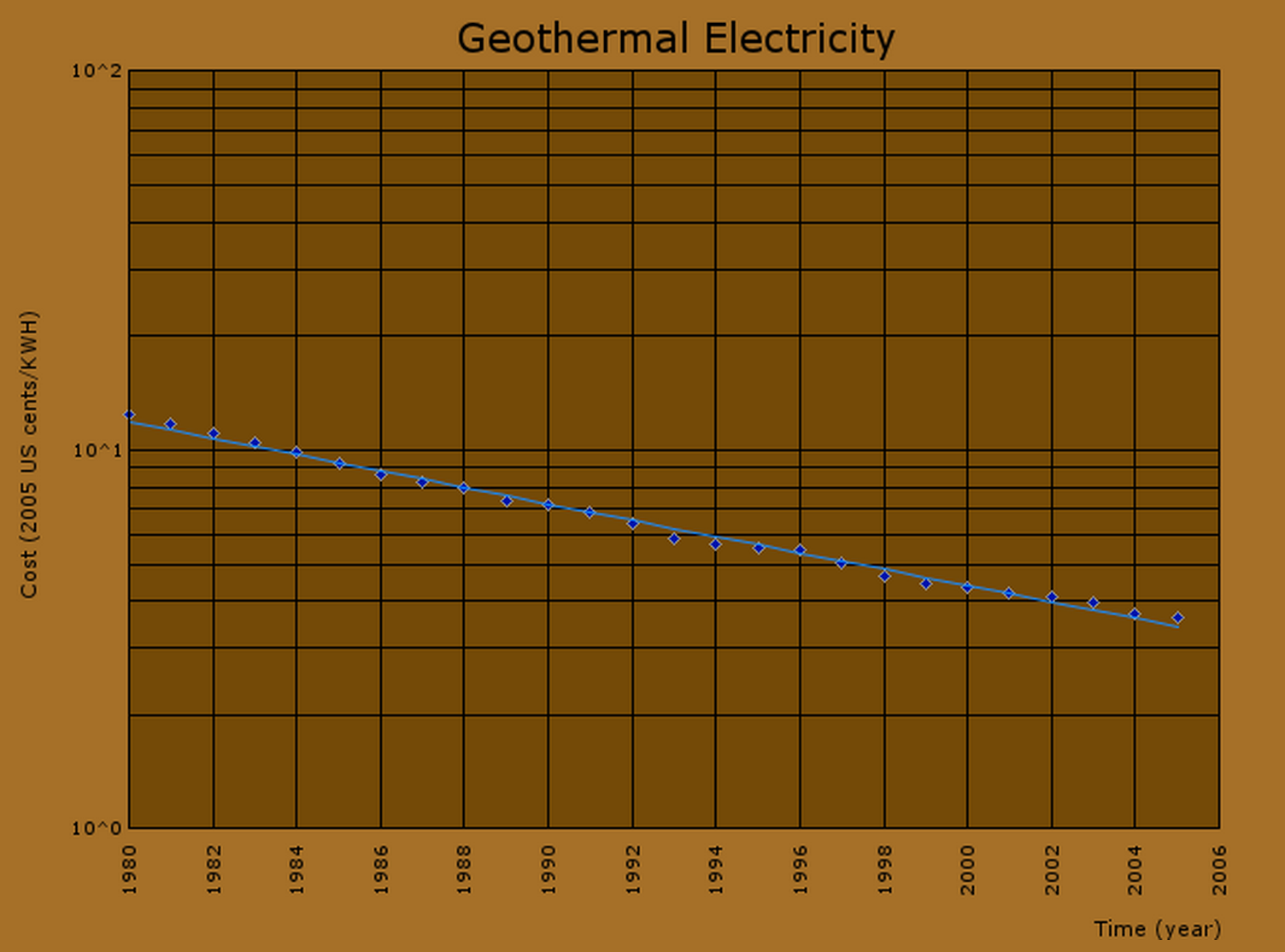 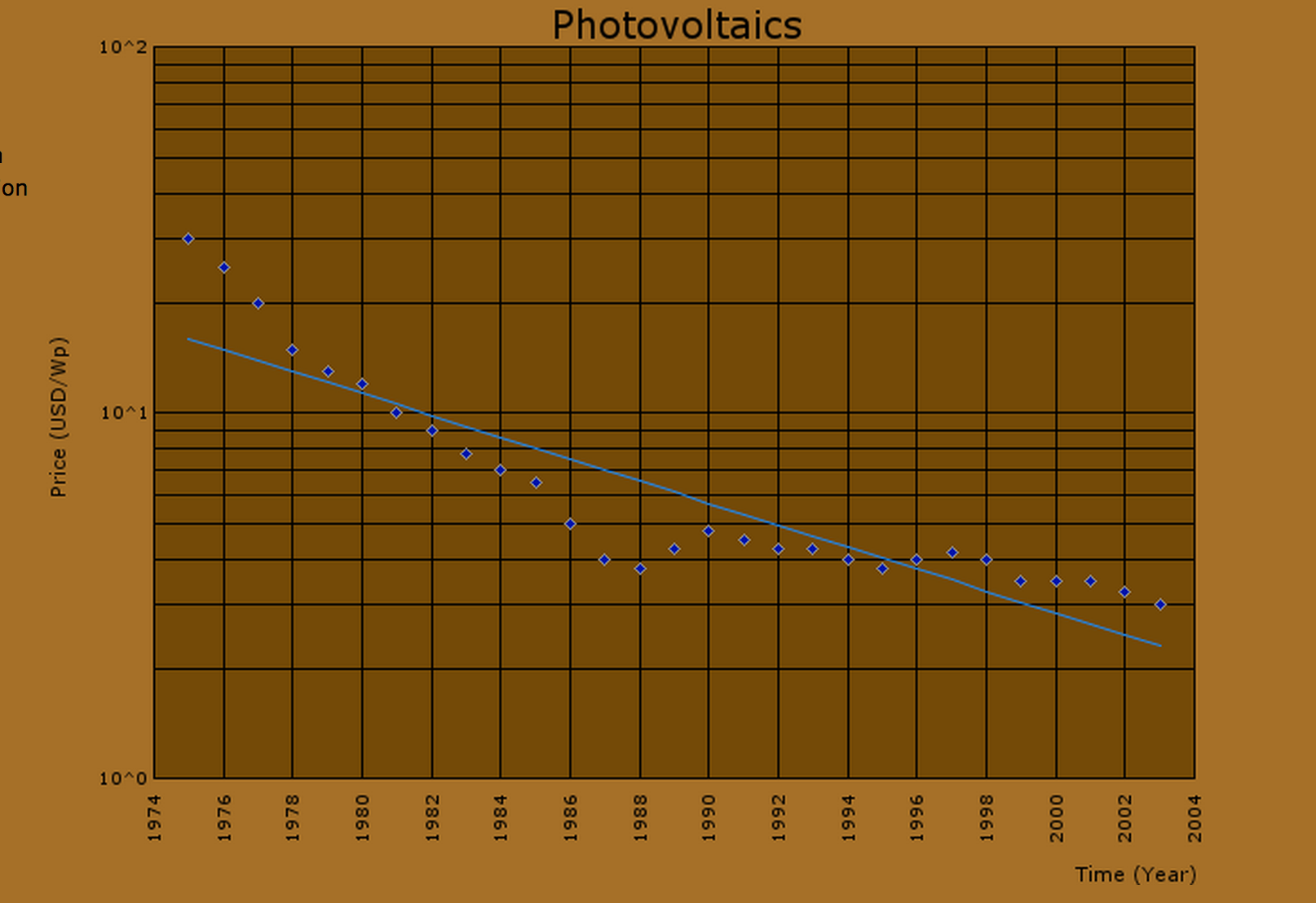 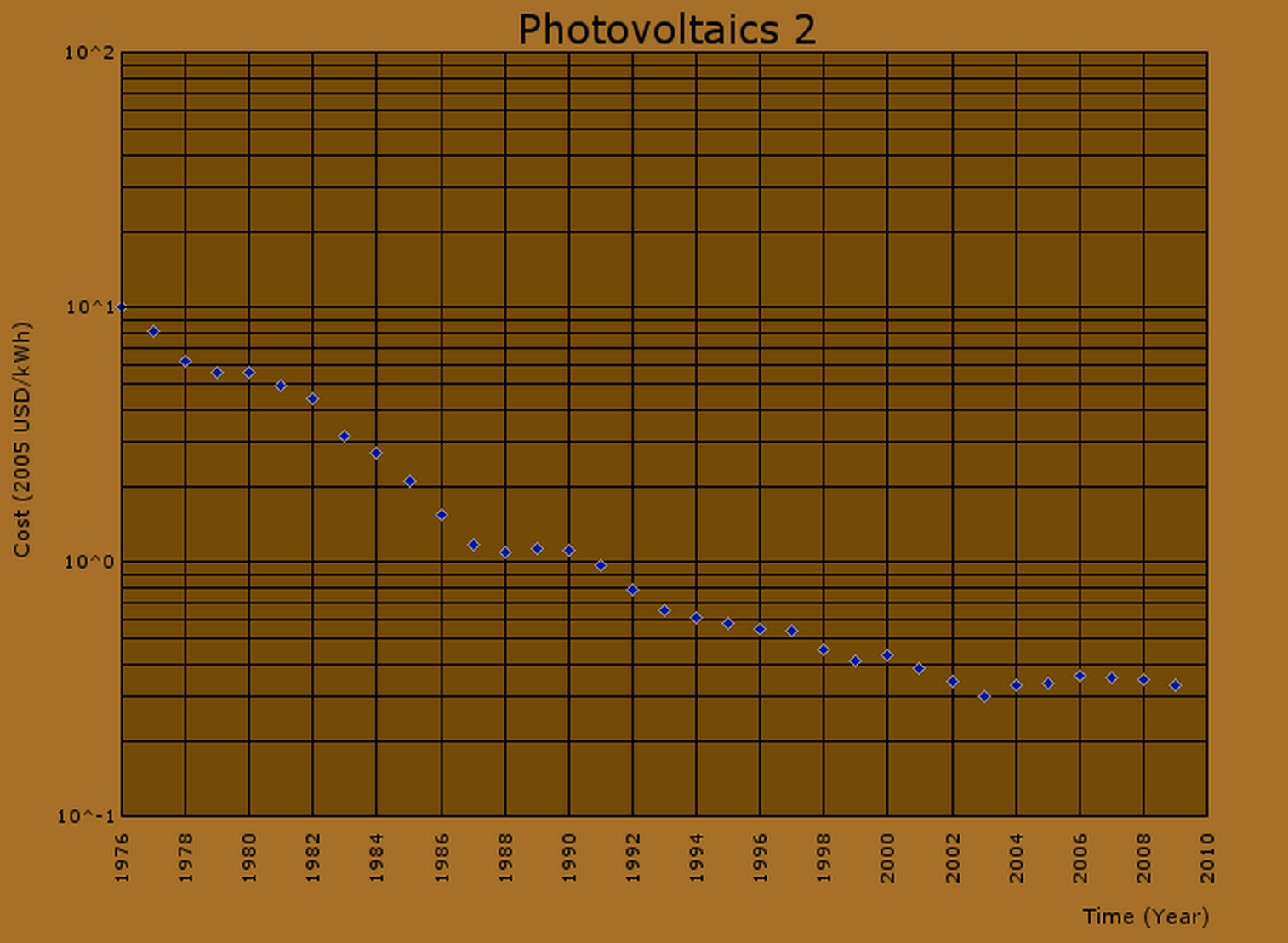 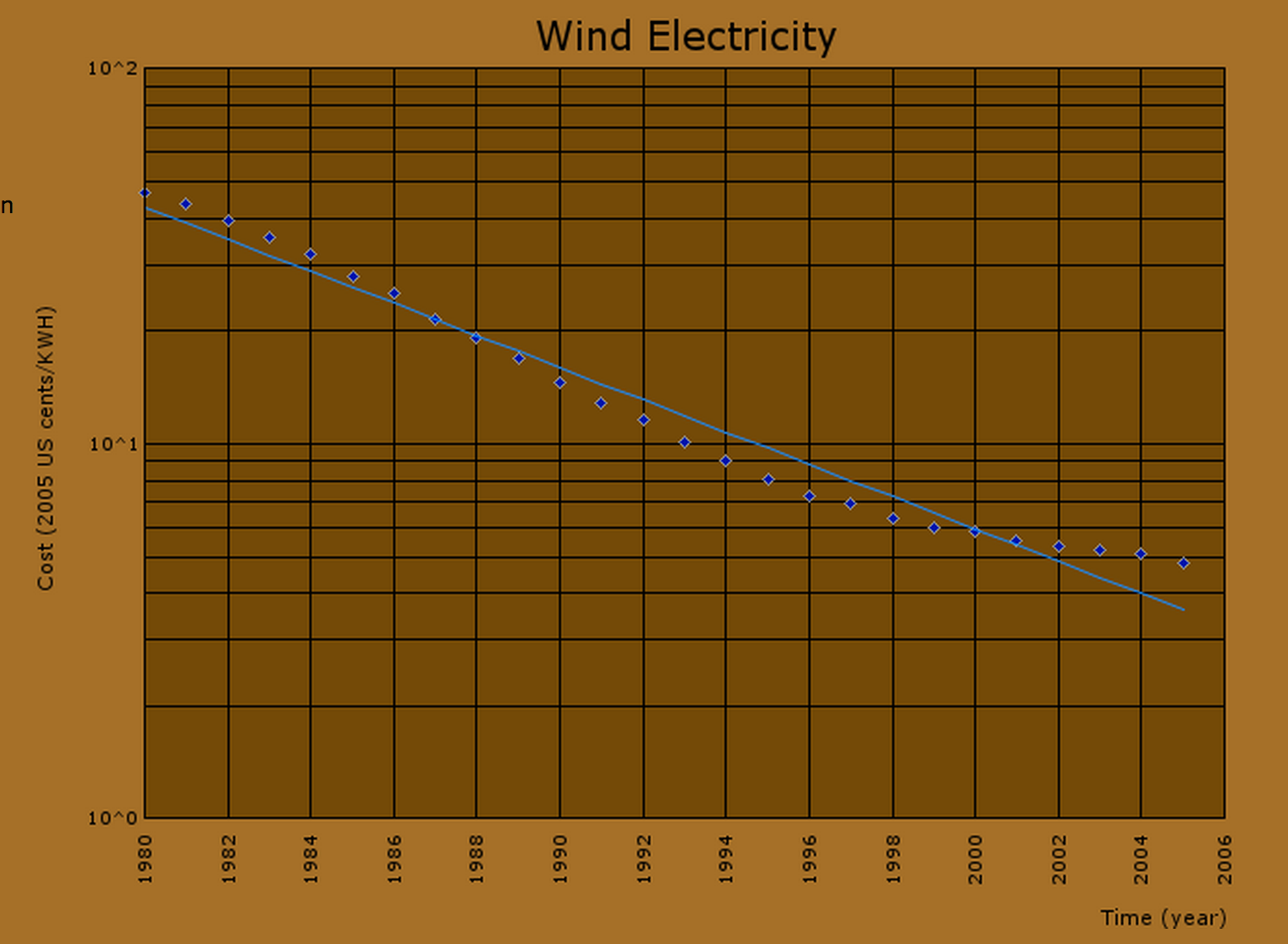 There are quite a few more at the Performance Curves Database. I see surprisingly little relationship between the funding curves and these metrics of progress. Some of them are shockingly straight. What is going on? (I haven't looked into these more than you see here).

5. Other writings on recursive self-improvement

Eliezer Yudkowsky wrote about the idea originally, e.g. here. David Chalmers investigated the topic in some detail, and Marcus Hutter did some more. More pointers here.

If you are particularly interested in these topics, and want to do further research, these are a few plausible directions, some inspired by Luke Muehlhauser's list, which contains many suggestions related to parts of Superintelligence. These projects could be attempted at various levels of depth.

This has been a collection of notes on the chapter.  The most important part of the reading group though is discussion, which is in the comments section. I pose some questions for you there, and I invite you to add your own. Please remember that this group contains a variety of levels of expertise: if a line of discussion seems too basic or too incomprehensible, look around for one that suits you better!

Next week, we will talk about 'decisive strategic advantage': the possibility of a single AI project getting huge amounts of power in an AI transition. To prepare, read Chapter 5, Decisive Strategic Advantage (p78-90). The discussion will go live at 6pm Pacific time next Monday Oct 27. Sign up to be notified here.