Many thanks to Peter Barnett, my alpha interlocutor for the first version of the proof presented, and draft reader.

Analogies are often drawn between natural selection and gradient descent (and other training procedures for parametric algorithms). It is important to understand to what extent these are useful and applicable analogies.

Here, under some modest (but ultimately approximating) simplifying assumptions, natural selection is found to be mathematically equivalent to an implementation of stochastic gradient descent.

The simplifying assumptions are presented first, followed by a proof of equivalence. Finally, a first attempt is made to consider the effect of relaxing each of these assumptions and what departure it causes from the equivalence, and an alternative set of assumptions which retrieves a similar equivalence is presented.

It is essential to understand that the equivalence rests on some simplifying assumptions, none of which is wholly true in real natural selection.

Let us make some substantial modelling simplifications, while retaining the spirit of natural selection, to yield an 'annealing style' selection process.

Mutations are distributed according to probability density Pm:Rn→[0,1] which is radially symmetric

We also consider the case of mutations very small relative to the genome, tending to infinitesimal.

Selection is stochastic, but monotonically determined by the fitness differential, according to selection function Ps:R→[0,1]

The population alternates between a single parent and its two offspring, one of which is selected to become the next generation's parent. 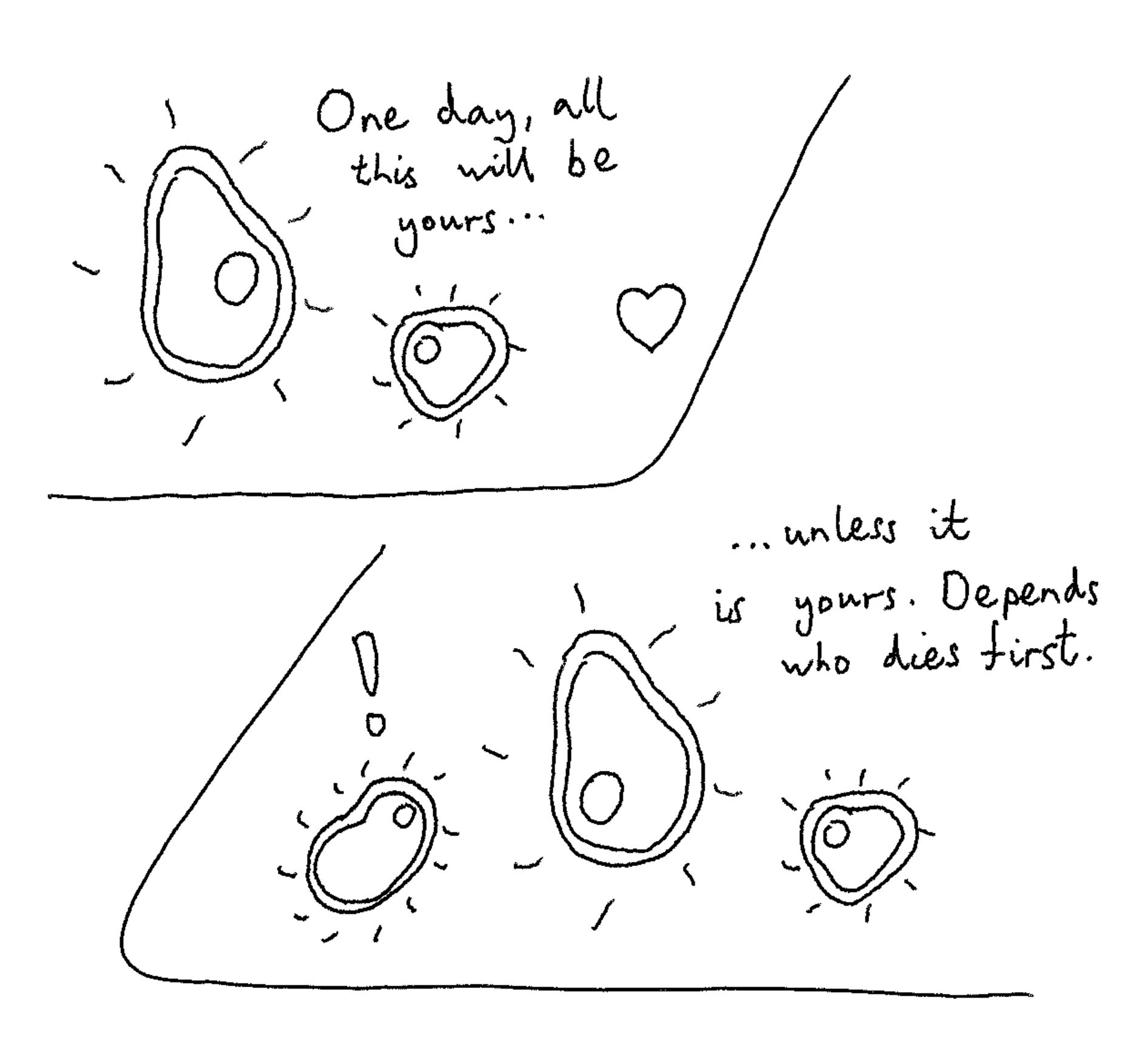 Now consider a binary fission from xt, yielding one perfect clone and one mutant clone x′t where mutation (xt+1−xt)∼Pm.

Define the next 'step', xt+1 as whatever mutant offspring x′t eventually happens to be successfully selected vs a perfect clone, according to the selection function on their fitness differential. (If the perfect clone gets selected, it may take many intermediate generations to constitute a 'step' here.) Denote by αs the resulting normalisation constant over mutations.

So the distribution over xt+1 given xt is

Call the mutation ϵ=xt+1−xt. Then we find

At this point it is clear that our step procedure depends, stochastically, on how closely the direction of the mutations match the fitness function's gradient.

By inspecting the expected value of the step direction, θϵ, we can make a more precise claim

and finally, by noticing the integral of an odd function[3] in θ

Thus the update between steps, ϵ, is a stochastic realisation of a variable whose orientation is, in expectation, exactly the same as that of the gradient ∇f(xt) of the fitness function.

By similar inspection of E[rϵ|xt] we can see that it is a monotonic function of |∇f(xt)|, depending on the particulars of Pm and Ps, which together provide a gradient-dependent 'learning rate'.

So natural selection in this form really is nothing but an implementation of unbiased stochastic gradient descent!

To what extent are the simplifying assumptions realistic? What happens to the equivalence when we relax any of the assumptions?

In real natural selection, the interaction between a changing environment and a dynamic distribution of organisms collaborating and competing leads to a time- and location-dependent fitness function.

Such a nonstationary fitness function is comparable to the use of techniques like self-play in RL, especially in conjunction with Population-Based Training, but is less comparable to vanilla SGD.

As such it may be appropriate to think of real natural selection as performing something locally equivalent to SGD but globally more like self-play PBT.

Moving from a continuous to a discrete genome means that the notion of a gradient is no longer defined in the same way, but we can still talk about empirical approximate gradients and differences.

The mechanisms which introduce mutations in real natural selection are certainly symmetrical in certain ways, but probably not in any way which straightforwardly maps to radial symmetry in a fixed-dimensional vector space.

Without radial symmetry, much of the mathematics goes through similarly, but instead of an unbiased estimate of the gradient direction, it is biased by the mutation sampling. As such, we might think of real natural selection as performing a biased stochastic gradient descent.

A comparison may be made to regularisation techniques (depending on whether they are construed as part of the training procedure or part of the objective function), or to the many techniques exploiting bias-variance tradeoffs in sampling-based gradient-estimation for RL, though these tend to be deliberately chosen with variance-reduction in mind, while natural selection may not exhibit such preferences.

This means that in real natural selection, the implied 'step size' or 'learning rate' is coupled with the particulars of the selection strength, the variance of the stochastic gradient, and the degree of empirical approximation applied. In contrast, stochastic gradient descent per se need not couple these factors together.

A degenerate population of 1 or 2

If we expand the population to arbitrary size, it is possible to retrieve the equivalence with additional assumptions.

Instead of a parent individual and cloned and mutated offspring individuals, considering parent and offspring populations, the same reasoning and proof is immediately applicable if we assume that mutations arise sufficiently rarely to be either fixed or lost before the next mutation arises. In this case Ps, the probability of selection, becomes the probability of fixation.

Of course this is not true for real natural selection.

If instead we allow for multiple contemporary mutant populations, an identical treatment can not be applied.

No recombination or horizontal transfer 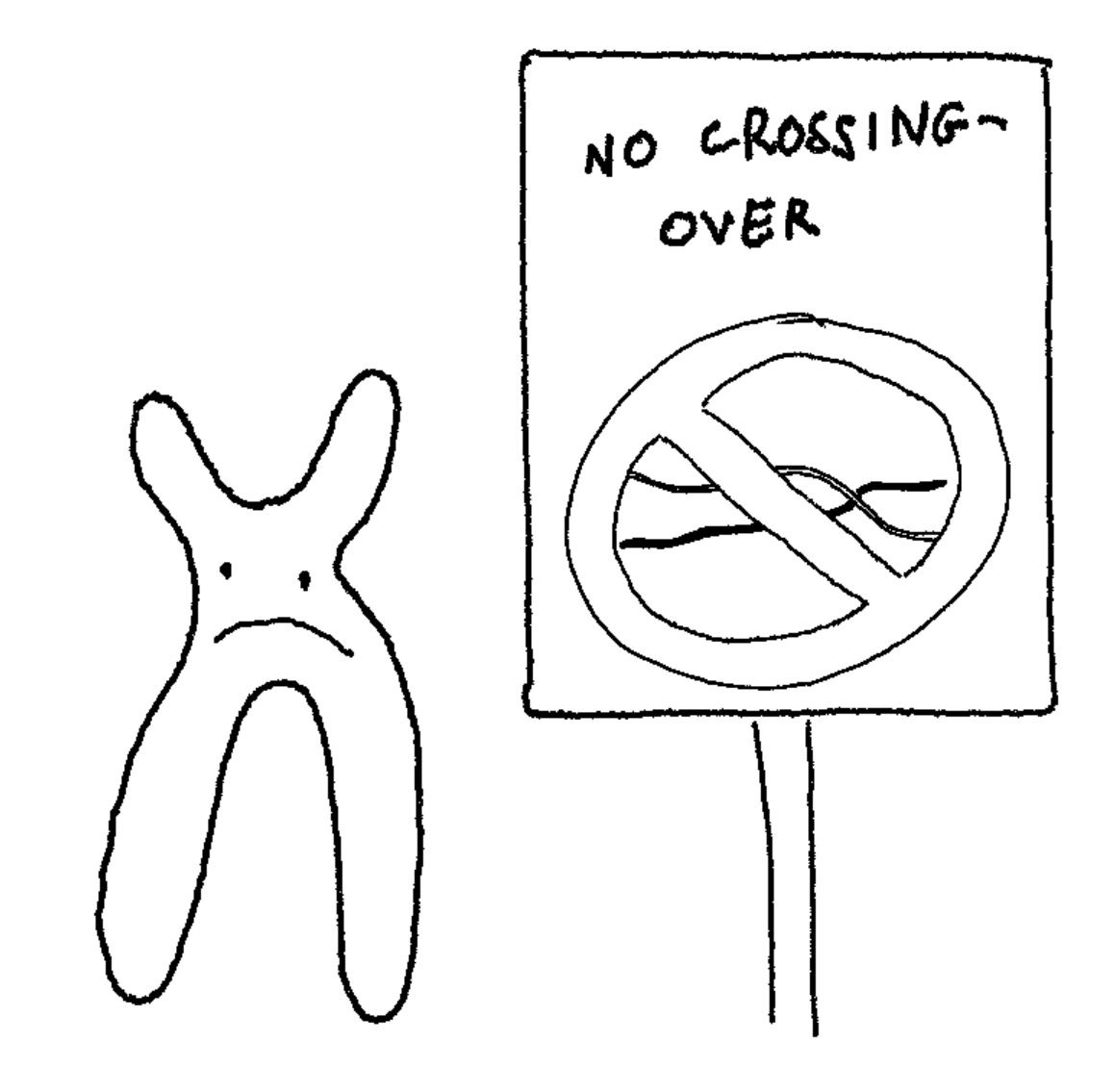 One of the most fascinating and mathematically complicating aspects of real natural selection is multiple heredity of genome elements, whether via horizontal transfer or sexual recombination.

The preceding proof of equivalence for natural selection and stochastic gradient descent rests on a model which does not include any notion of multiple heredity.

Interestingly, the 'complicating' factor of multiple heredity provides a way to retrieve the equivalence in the presence of multiple contemporary mutations, as long as we continue to consider the limit of infinitesimal mutations.

For a single-heredity population, with multiple contemporary mutant subpopulations, we must either model 'only one winner', or model an ongoing mixture of subpopulations of varying sizes, either of which Ps is unable to model without modification.

On the other hand, in a multiple-heredity population, assuming eventually-universal mixing, and crucially continuing to assume a fixed fitness function (independent of the population mixture), a particular mutation must either fix or go extinct[4].

So let us consider (instead of xt and xt+1) xt0 and xt1, representing the fixed part of the genotype at times t0 and t1>t0 respectively, that is the initial genome x0 plus all so-far-fixed mutations.

In the time between t0 and t1 the population will experience some integer number of mutation events (perhaps roughly Poisson-distributed but this is inessential for the proof), each of which is distributed according to Pm. Furthermore, at time t0 some mutations from earlier times may be 'in flight' and not yet fixed or extinct.

Assuming fixed fitness, and infinitesimal mutations, we can represent the probability of fixation by time t1, namely Pf with exactly the same properties as formerly assumed for Ps[5]. Thus each mutation fixed between t0 and t1 satisfies exactly the same unbiased-gradient-sampling property derived earlier, and so, therefore, does their sum xt1−xt0.

This relies on all in-flight mutations not affecting the fitness differential, and thus Pf, of their contemporaries, which is certainly the case in the limit of infinitesimal mutations, but not the case for real natural selection.

In particular, this means no speciation.

NB we also rely on 4. the limit to infinitesimal mutations, in an additional capacity. We also exclude all 'self-play-like' interactions arising from the larger population by relying further on 1. fixed 'fitness function'.

It may be feasible to retrieve a similar equivalence without excluding population-dependent fitness interactions with a different framing, for example considering gradients over 'mixed strategies' implied by population distributions.

Natural selection, under certain conditions, carries out an implementation of stochastic gradient descent. As such, analogies drawn from one to the other are not baseless; we should, however, examine the necessary assumptions and be mindful of the impact of departures from those assumptions.

In particular, two sets of assumptions are presented here which together are sufficient to retrieve an equivalence:

This is not enough to cover all instances of real natural selection, but provides an approximate mapping from many instances.

Assumptions 2 and 3 together yield 'unbiased' SGD, and in their absence varying degrees of bias arise.

Assumption 1 rules out, most importantly, 'self play' and 'population-based' aspects of natural selection, which have other analogies in machine learning but which are firmly absent from vanilla SGD.

Further work could uncover other parameters of the emergent SGD, such as the variance of the implied gradient, the size of the implicit learning rate, the bias caused by relaxing assumption 3, or quantify the coupling between those factors.

Further scrutiny, especially of the assumptions related to population, 1, 5, 6, and 7, could better quantify the effect of making weaker or different assumptions.