A near-final version of my Anthropic Decision Theory paper is available on the arXiv. Since anthropics problems have been discussed quite a bit on this list, I'll be presenting its arguments and results in this and subsequent posts 1 2 3 4 5 6.

The Sleeping Beauty problem, and the incubator variant

The Sleeping Beauty problem is a major one in anthropics, and my paper establishes anthropic decision theory (ADT) by a careful analysis it. Therefore we should start with an explanation of what it is.

In the standard setup, Sleeping Beauty is put to sleep on Sunday, and awoken again Monday morning, without being told what day it is. She is put to sleep again at the end of the day. A fair coin was tossed before the experiment began. If that coin showed heads, she is never reawakened. If the coin showed tails, she is fed a one-day amnesia potion (so that she does not remember being awake on Monday) and is reawakened on Tuesday, again without being told what day it is. At the end of Tuesday, she is put to sleep for ever. This is illustrated in the next figure:

The incubator variant of the problem, due to Nick Bostrom, has no initial Sleeping Beauty, just one or two copies of her created (in different, identical rooms), depending on the result of the coin flip. The name `incubator' derived from the machine that was to do the birthing of these observers. This is illustrated in the next figure: 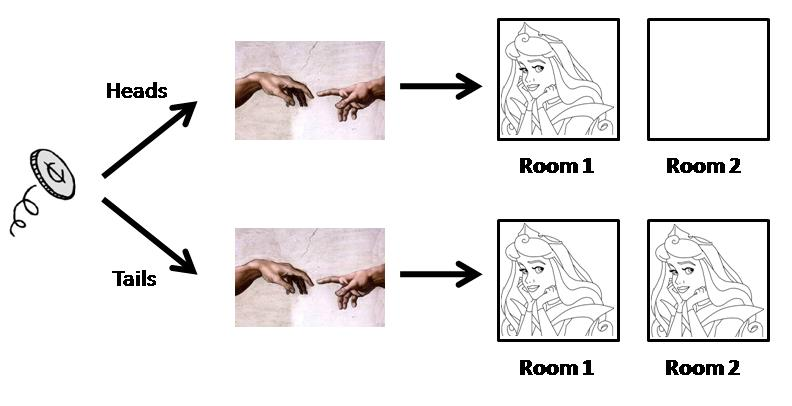 The question then is what probability a recently awoken or created Sleeping Beauty should give to the coin falling heads or tails and it being Monday or Tuesday when she is awakened (or whether she is in Room 1 or 2).

Altruistic agents, on the other hand, care about the welfare of everyone, not just themselves. These can be divided into total utilitarians, and average utilitarians (there are other altruistic motivations, but they aren't relevant to the paper). In summary:

Next:
Anthropic Decision Theory II: Self-Indication, Self-Sampling and decisions
19 comments13 karma
Log in to save where you left off
Mentioned in
13Non-poisonous cake: anthropic updates are normal
1The Doomsday argument in anthropic decision theory
New Comment