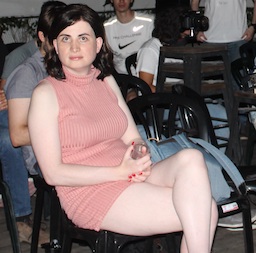 E-mail: vanessa DOT kosoy AT {the thing reverse stupidity is not} DOT org

No wiki contributions to display.

There's also the ALTER prize for progress on the learning-theoretic agenda.

Yes, absolutely! The contest is not a publication venue.

A major impediment in applying RL theory to any realistic scenario is that even the control problem[1] is intractable when the state space is exponentially large (in general). Real-life agents probably overcome this problem by exploiting some special properties of real-life environments. Here are two strong candidates for such properties:

Here's an attempt to formalize these properties.

We will define a certain formal language for describing environments. These environments are going to be certain asymptotic regions in the space of MDPs.

It might be useful to think of t1×t2 as vertical composition and tf[u] as horizontal composition, in the category-theoretic sense.

In order to assign semantics to this language, we need to define the environment associated with each term t:(x1…xn)→y. We will do so by assigning t a state space S(t), each state s∈S(t) an input ι(s) (which determines the action space at this state) and a transition kernel. This is done recursively:

The upshot is that, given a list of term definitions (which has a structure similar to a directed acyclic graph, since the definition of each term can refer to previously defined terms), we get an environment that can have an exponentially large number of states, but the control problem can be solved in time polynomial in the size of this description, given some assumptions about the reward function. Specifically, we "decorate" our terms with reward functions in the following way:

For timescale decomposition, this planning algorithm can be regarded as formalization of instrumental goals.

An important problem is, understanding the sample complexity of learning hypothesis classes made of such environments. First in the unbounded case and then with polynomial-time learning algorithms.

A question that often comes up in discussion of IRL: are agency and values purely behavioral concepts, or do they depend on how the system produces its behavior? The cartesian measure of agency I proposed seems purely behavioral, since it only depends on the policy. The physicalist version seems less so since it depends on the source code, but this difference might be minor: this role of the source is merely telling the agent "where" it is in the universe. However, on closer examination, the physicalist g is far from purely behaviorist, and this is true even for cartesian Turing RL. Indeed, the policy describes not only the agent's interaction with the actual environment but also its interaction with the "envelope" computer. In a sense, the policy can be said to reflects the agent's "conscious thoughts".

This means that specifying an agent requires not only specifying its source code but also the "envelope semantics" C (possibly we also need to penalize for the complexity of C in the definition of g). Identifying that an agent exists requires not only that its source code is running, but also, at least that its history h is C-consistent with the α∈2Γ variable of the bridge transform. That is, for any y∈α we must have dCy for some destiny d⊐h. In other words, we want any computation the agents ostensibly runs on the envelope to be one that is physically manifest (it might be this condition isn't sufficiently strong, since it doesn't seem to establish a causal relation between the manifesting and the agent's observations, but it's at least necessary).

Notice also that the computational power of the envelope implied by C becomes another characteristic of the agent's intelligence, together with g as a function of the cost of computational resources. It might be useful to come up with natural ways to quantify this power.

The spectrum you're describing is related, I think, to the spectrum that appears in the AIT definition of agency where there is dependence on the cost of computational resources. This means that the same system can appear agentic from a resource-scarce perspective but non-agentic from a resource-abundant perspective. The former then corresponds to the Vingean regime and the latter to the predictable regime. However, the framework does have a notion of prior and not just utility, so it is possible to ascribe beliefs to Vingean agents. I think it makes sense: the beliefs of another agent can predictably differ from your own beliefs if only because there is some evidence that you have seen but the other agent, to the best of your knowledge, have not[1].

There seems to be an even more elegant way to define causal relationships between agents, or more generally between programs. Starting from a hypothesis Θ∈□(Γ×Φ), for Γ=ΣR, we consider its bridge transform B∈□(Γ×2Γ×Φ). Given some subset of programs Q⊆R we can define Δ:=ΣQ then project B to BΔ∈□(Γ×2Δ)[1]. We can then take bridge transform again to get some C∈□(Γ×2Γ×2Δ). The 2Γ factor now tells us which programs causally affect the manifestation of programs in Q. Notice that by Proposition 2.8 in the IBP article, when Q=R we just get all programs that are running, which makes sense.

The version of PreDCA without any explicit malign hypothesis filtering might be immune to malign hypotheses, and here is why. It seems plausible that IBP admits an agreement theorem (analogous to Aumann's) which informally amounts to the following: Given two agents Alice and Bobcat that (i) share the same physical universe, (ii) have a sufficiently tight causal relationship (each can see what the other sees), (iii) have unprivileged locations inside the physical universe, (iv) start from similar/compatible priors and (v) [maybe needed?] similar utility functions, they converge to similar/compatible beliefs, regardless of the complexity of translation between their subjective viewpoints. This is plausible because (i) as opposed to the cartesian framework, different bridge rules don't lead to different probabilities and (ii) if Bobcat considers a simulation hypothesis plausible, and the simulation is sufficiently detailed to fool it indefinitely, then the simulation contains a detailed simulation of Alice and hence Alice must also consider this to be plausible hypothesis.

If the agreement conjecture is true, then the AI will converge to hypotheses that all contain the user, in a causal relationship with the AI that affirms them as the user. Moreover, those hypotheses will be compatible with the user's own posterior (i.e. the differences can be attributed the AIs superior reasoning). Therefore, the AI will act on the user's behalf, leaving no room for mesa-optimizers. Any would-be mesa-optimizer has to take the shape of a hypothesis that the user should also believe, within which the pointer-to-values still points to the right place.

The problem of future unaligned AI leaking into human imitation is something I wrote about before. Notice that IDA-style recursion help a lot, because instead of simulating a process going deep into the external timeline's future, you're simulating a "groundhog day" where the researcher wakes up over and over at the same external time (more realistically, the restart time is drifting forward with the time outside the simulation) with a written record of all their previous work (but no memory of it). There can still be a problem if there is a positive probability of unaligned AI takeover in the present (i.e. during the time interval of the simulated loop), but it's a milder problem. It can be further ameliorated if the AI has enough information about the external world to make confident predictions about the possibility of unaligned takeover during this period. The out-of-distribution problem is also less severe: the AI can occasionally query the real researcher to make sure its predictions are still on track.

I think it's a terrible idea to automatically adopt an equilibrium notion which incentivises the players to come up with increasingly nasty threats as fallback if they don't get their way. And so there seems to be a good chunk of remaining work to be done, involving poking more carefully at the CoCo value and seeing which assumptions going into it can be broken.

I'm not convinced there is any real problem here. The intuitive negative reaction we have to this "ugliness" is because of (i) empathy and (ii) morality. Empathy is just a part of the utility function which, when accounted for, already ameliorates some of the ugliness. Morality is a reflection of the fact we are already in some kind of bargaining equilibrium. Therefore, thinking about all the threats invokes a feeling of all existing agreements getting dissolved sending us back to the "square one" of the bargaining. And the latter is something that, reasonably, nobody wants to do. But none of this implies this is not the correct ideal notion of bargaining equilibrium.

This is a fascinating result, but there is a caveat worth noting. When we say that e.g. AlphaGo is "superhuman at go" we are comparing it humans who (i) spent years training on the task and (ii) were selected for being the best at it among a sizable population. On the other hand, with next token prediction we're nowhere near that amount of optimization on the human side. (That said, I also agree that optimizing a model on next token prediction is very different from optimizing it for text coherence would be, if we could accomplish the latter.)

The short answer is, I don't know.

The long answer is, here are some possibilities, roughly ordered from "boring" to "weird":