Towards a Mechanistic Understanding of Goal-Directedness

This post is part of the research I have done at MIRI with mentorship and guidance from Evan Hubinger. 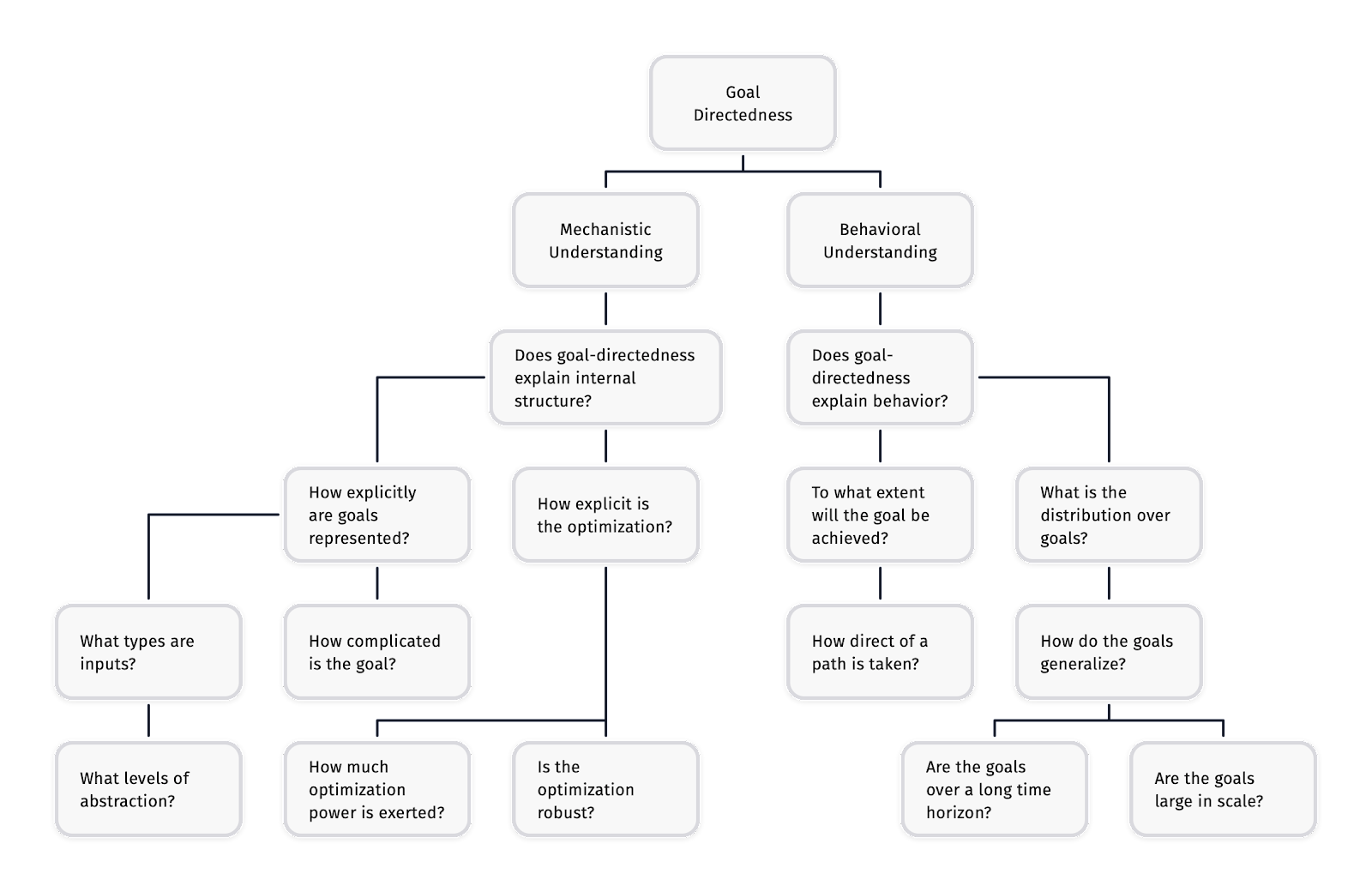 We restructure these properties hierarchically: 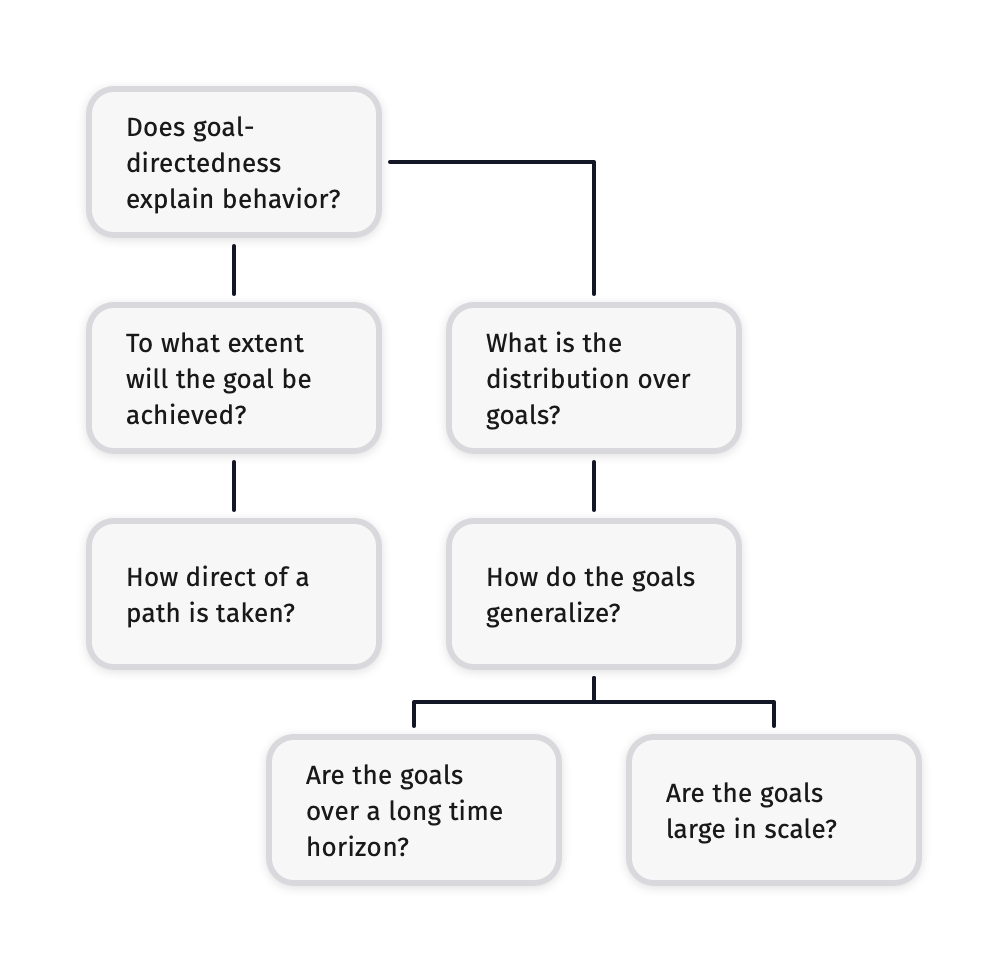 We structure these properties hierarchically: 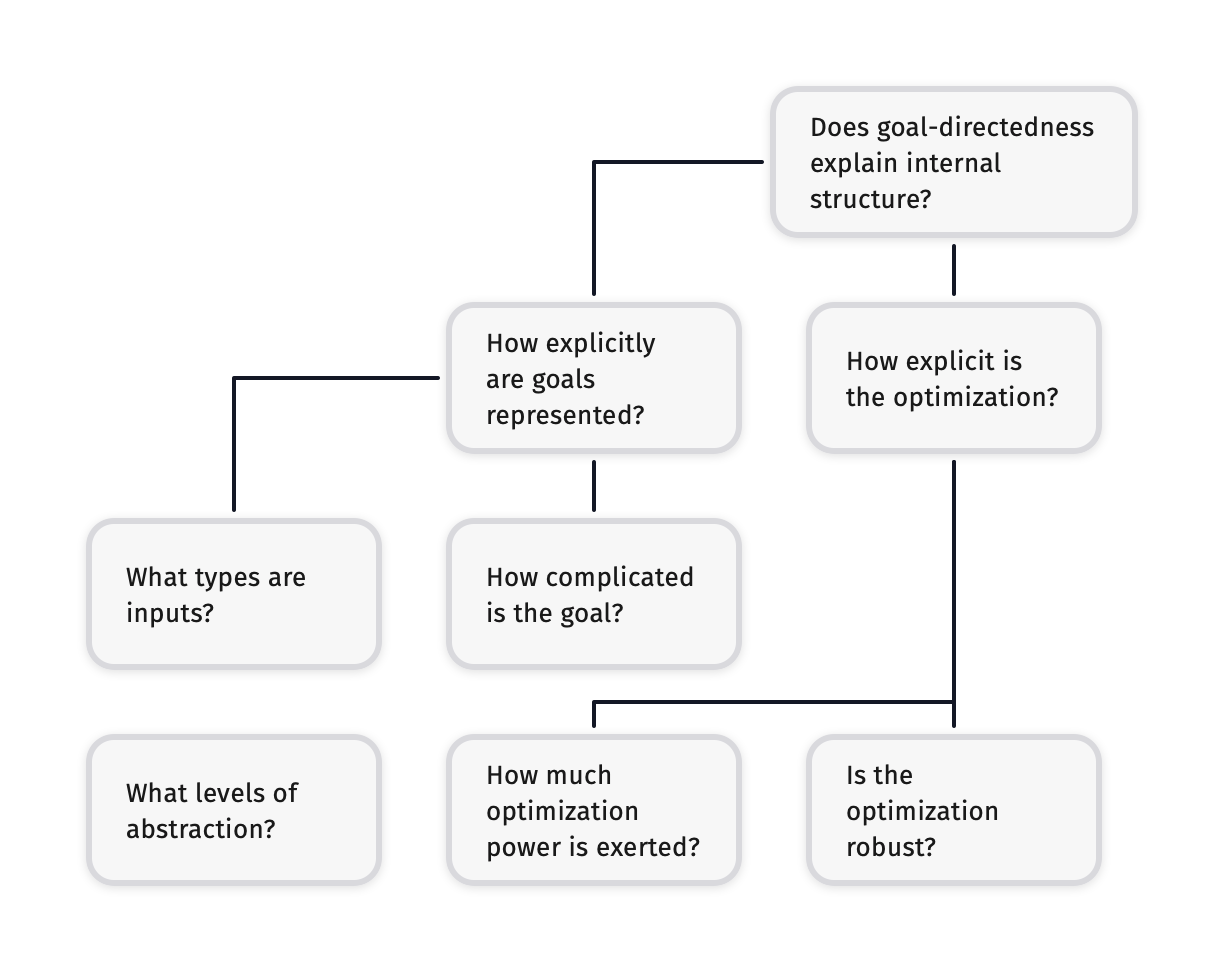 Mechanistic and behavioral understandings are connected: the behavior of the agent is the result of its internal mechanisms. However, many possible internal mechanisms can result in the same behavior, so this connection is lossy. For example, a maze-solver can either be employing a good set of heuristics or implementing depth-first search.

We can attempt to formalize the connection with a set of hierarchical conjectures. Consider all of these conjectures to be caveated with “given certain assumptions”, where “sufficiently complicated goals” and “sufficiently diverse environment” might be two:

Funny too that you focus on an idea I am writing a post about (albeit from a different angle). I think I broadly agree with your conjectures, for sufficient competence and generalization at least.

Most discussion about goal-directed behavior has focused on a behavioral understanding, which can roughly be described as using the intentional stance to predict behavior.

I'm not sure I agree with that. Our lit review shows that there are both behavioral and mechanistic approaches (Richard's goal-directed agency is an example of the latter)

A machine “is an NFA (mechanistically)” if the internal mechanism has non-deterministic transitions.

The analogy is great, but if I nitpick a little, I'm not sure a non-determinism mechanism makes sense. You have either deterministm or probabilities, but I don't see how to implement determinism. That's by the way a reason why the non-deterministic Turing Machines aren't really used anymore when talking about complexity classes like NP.

Two corrections here: the post was written with Michele Campolo and Joe Collman, so they should also be given credit; and we identify five properties that the literature on the subject focuses and agrees on. We don't necessarily say that both are necessary or as important.

We restructure these properties hierarchically:

I would like more explanations here, because I'm not sure that I follow. Specifically, I can't make sense of "what is the distribution over goals?". Are you talking about the prior over goals in some sort of bayesian goal-inference?

Roughly speaking, an agent is mechanistically goal-directed if we can separate it into a goal that is being pursued and an optimization process doing that pursuit.

I like this. My current position (that will be written down in my next post on the subject) is that these mechanical goal directed systems are actually behavioral goal-directed systems at a certain level of competence. They also represent a point where "simple models" become more predictive than the intentional stance, because the optimization itself can be explained a simple model.

Efficient: The more mechanistically goal-directed a system is, the more efficiently it pursues its goal.

Shouldn't that be the other way around?

It's funny, because I actually see far-sightedness as a property of the internal structure more than the behavior. So I would assume that a mechanically goal-directed system shows some far-sightedness.

However, many possible internal mechanisms can result in the same behavior, so this connection is lossy. For example, a maze-solver can either be employing a good set of heuristics or implementing depth-first search.