The challenge is this: given a closed physical system, if I point to a region and tell you that knowledge is accumulating in this region, how would you test my claim? What are the physical characteristics of the accumulation of knowledge? What is it, exactly, about an artifact inscribed with instructions for building advanced technology that makes it so different from an ordinary rock, or from a video camera that has been travelling the cosmos recording data since the beginning of the universe? We are looking for a definition of knowledge at the level of physics.

Our goal is to articulate what it means for knowledge to accumulate within a physical system. The previous post looked at mutual information between high- and low-level configurations of a digital abstraction layer as a possible definition of knowledge and found that mutual information did not differentiate raw sensor data from useful models derived from that sensor data.

Consider a computer scanning the sky for a satellite in order to transmit some information to it. The computer will scan the sky looking for transmissions on certain radio frequencies, and will integrate each of these noisy observations over time into an estimate of the satellite’s position. The computer only has enough power to transmit the information once, so it’s important that it locks onto the satellite’s true position before it transmits. 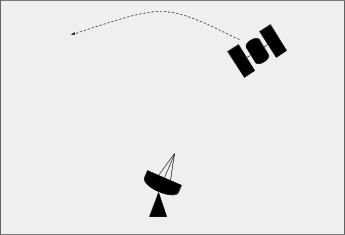 Initially, the computer has no knowledge of the satellite’s position and is approximately equally likely to find it in any of its possible positions:

The X axis of the graph above is the true position of the satellite, and the Y axis is the performance that we expect the system to eventually achieve. In this example the computer has a pretty good apriori chance of locking onto the satellite’s position no matter where the satellite starts out.

This is the counter-intuitive thing about knowledge: as the computer accumulates knowledge in anticipation of taking an action, the computer actually becomes increasingly sensitive to the configuration of its environment. The computer in this example is "placing its bets" in a more and more irreversible way, and this makes sense because the computer has to eventually "take its shot" by taking an irreversible action whose consequences depend on the system being in the configuration that it thinks it is. You can’t take your shot without committing. Perhaps knowledge accumulation is about a kind of gradual commitment to more and more specific possible world states, as measured in anticipated future performance.

If we have made good choices in setting up our mechanism of knowledge accumulation, then the world configurations that we can expect the entity to perform well in will precisely match the configuration that the world is actually in. That is: the entity’s knowledge matches the truth.

But even so, it seems that knowledge is necessarily associated with a decrease in robustness to possible world configurations. This is the opposite of the intuitive notion of knowledge as something that increases flexibility. The following example investigates this further.

Example: Learning how to use a search engine

Suppose I grow up in an isolated community where all technology is banned. Emerging into the modern world as a young adult, I find myself struggling to find food, housing, and health care. One day, a stranger teaches me how to use a search engine on a computer. This knowledge greatly increases my capacity to navigate the modern world.

I am not making a point here about the dangers of depending on technology in general. It is not that we anticipate the search engine becoming unavailable in the future and therefore shouldn’t depend on it. It’s that even today, even while the search engine is available and providing accurate information, my "anticipated performance" as evaluated over all possible world configurations has gone from being relatively flat along the dimension corresponding to search engine accuracy, to highly peaked. This is not a bad thing when our knowledge is accurate and so the way the world actually is corresponds to the peak in the anticipated performance graph. Perhaps we can define knowledge as the extent to which the anticipated performance of a system is sensitive to the configuration of its environment. The next example will sharpen up this definition.

Consider a go-kart being driven by a computer system that uses a camera to estimate the shape of the turn and plans its turn accordingly. It is approaching a turn: 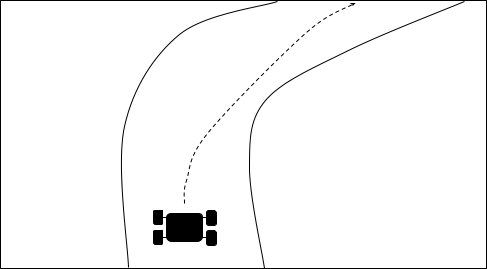 If we were to press "freeze" on the world just as the go-kart was entering the right turn and swap out the right turn for a left turn then computer system would execute the turn poorly, since it takes a few observations for the computer to realize that the world has unexpected changed on it, and by that time it will already have partially committed to a right turn. In particular, it would execute the left turn more poorly than it would if it approached the left turn in an ordinary way, without it being swapped out at the last minute.

Due to this counterfactual inflexibility, we say that the go-kart had accumulated some knowledge about the turn.

This is not an argument that the naive go-kart has any actual advantage over the sophisticated go-kart. We do not expect right turns to magically change into left turns in the real world. If we had a yet more sophisticated go-kart that was designed to deal with spuriously shape-shifting race courses then we could still apply this trick to it, so long as it was acting on any model of its environment that required time to accumulate.

Consider now a go-kart that once again drives straight until it bumps into a wall, but modified to collect data from a variety of sensors and record all sensor data to an internal hard drive. This is the case that foiled our previous attempt to define the accumulation of knowledge, since this data-recording go-kart has very high mutual information with its environment — higher, even, than the "intelligent" go-kart that models and anticipates turns as they approach. But our definition of the accumulation of knowledge as a sensitivity of anticipated performance to the configuration of this environment handles this case, since we can "kidnap" this data-recording go-kart out of the right turn and into a left turn and see that its behavior is the same as if it had approached the left turn from the start, and hence under this definition we conclude that the data-recording go-kart does not have as much knowledge of its environment as the intelligent go-kart that anticipates and plans for turns, which matches our intuitions.

Unfortunately this new definition fails on the first example from the first post in this sequence: a sailing ship making cartographic maps of a coastline. We might imagine that an accurate map is constructed, but that the ship later sinks and the map is never shared with anyone, so there are no actions taken by anyone that are dependent on the map. Therefore we would not be able to discern the accumulation of knowledge happening aboard the ship by examining the ship’s counterfactual performance on some task, since there are no tasks being undertaken in a way that uses the knowledge that is accumulating.

Yet it does not seem quite right to say that there is no knowledge accumulating here. We could board the ship and see an accurate map being drawn. It would be strange to deny that this map constitutes knowledge simply because it wasn’t later used for some instrumental purpose.

Knowledge appears to bind an agent’s actions to some particular configurations of the world. The ideas in this post seem like helpful signposts on the way to a definition of the accumulation of knowledge, but it does not seem that we are all the way there. We ought to be able to recognize knowledge that is accumulated but never used, or if this is impossible then we should understand why that is.

Previous:
Knowledge is not just digital abstraction layers
2 comments18 karma
Next:
The accumulation of knowledge: literature review
No comments29 karma
Log in to save where you left off
New Comment
2 comments, sorted by
top scoring
Click to highlight new comments since: Today at 10:18 AM
[-]johnswentworth1y 3

Here's a similarly-motivated model which I have found useful for the knowledge of economic agents.

In economic models, it's normal to include lots of constraints on agents' choices - like a budget constraint, or a constraint that our medieval smith cannot produce more than n plows per unit of iron. With agents choosing their actions in every world, we can introduce information as just another constraint: if I don't have information distinguishing two worlds, then I am constrained to take the same action in those two worlds. If the medieval smith cannot distinguish iron with two different compositions, then the action taken in those two worlds must be the same.

Do you want to chat sometime about this?

I think it's pretty clear why we think of the map-making sailboat as "having knowledge" even if it sinks, and it's because our own model of the world expects maps to be legible to agents in the environment, and so we lump them into "knowledge" even before actually seeing someone use any particular map. You could try to predict this legibility part of how we think of knowledge from the atomic positions of the item itself, but you're going to get weird edge cases unless you actually make a intentional-stance-level model of the surrounding environment to see who might read the map.

EDIT: I mean, the interesting thing about this to me is then asking the question of what this means about how granular to be when thinking about knowledge (and similar things).