Recall from post #-2 that we have two perspectives on stock IDA.[1] One is that of a human with access to a model, the other is that of an HCH tree.[2] We can think of HCH as 'pure' or 'idealized' Factored Cognition that abstracts away implementation details,[3] and the training procedure as trying to implement this ideal.

If HCH is the ideal of stock IDA, then what is the ideal of Debate? Since this is a sequence about Factored Cognition, we are primarily interested in analyzing the idealized versions, so this is the first question we'd like to answer.

Interlude on notation: throughout this sequence, we will need to refer to single statements, sequences of statements, and sets of statements. To make telling them apart as easy as possible, we follow the following norms:

We'll use the first two of those in the following definition that will be crucial in our discussion of Debate. If s is a statement and S=(s1,...,sn+1) a sequence of statements such that sn+1=“(s1,...,sn) imply s.”, we say that S is an explanation for s and denote this by writing Se→s. In this setting, sn+1 is what we call an implication statement: it precisely says that the statements (s1,...,sn) imply the statement sn+1. Here's a made-up example where s4 is the implication statement: 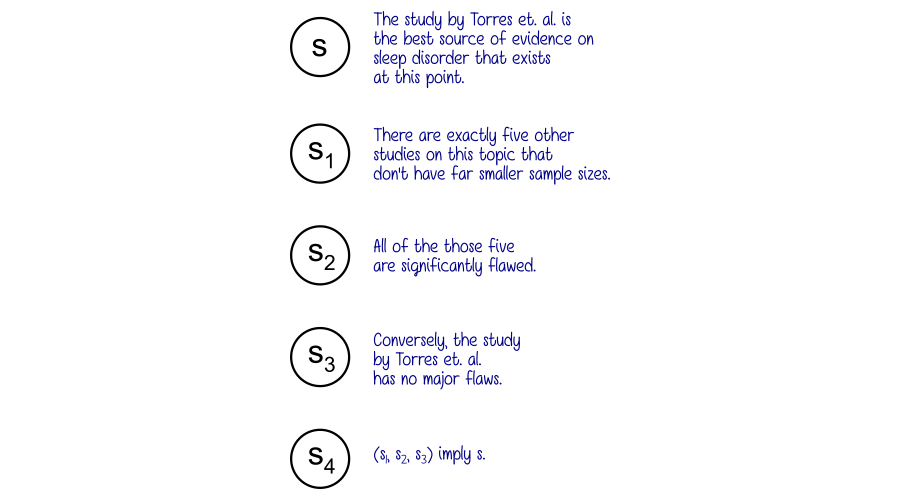 The purpose of having implication statements is to ensure that s trivially follows from s1,s2,s3,s4 since the implication itself is among those statements (here s4). If you dispute s, you must dispute one of the si.

Armed with this concept, we can define our idealization of the Debate scheme:

Instead of having implication statements, one could have allowed the second agent to deny the fact of the implication, as a 'special move' of sorts. However, I think that would be a mistake; one of the take-away messages from this post is that there is no sharp line between implications and other statements. Both can be disputed and argued about further, which is why we're treating them as the same type of object. In the definition of Ideal Debate above, the second agent is always free to point to sn+1 (which is precisely the implication statement), and if so, the game proceeds normally, i.e., the first agent has to provide an explanation for sn+1 as the next move.

Below is an example of what an Ideal Debate transcript might look like.[7] Here, the implication statement is not shown (but this is just to make it easier to draw – it should really be there at every level!), and the statement we recurse into is always the one that the second agent has pointed to. 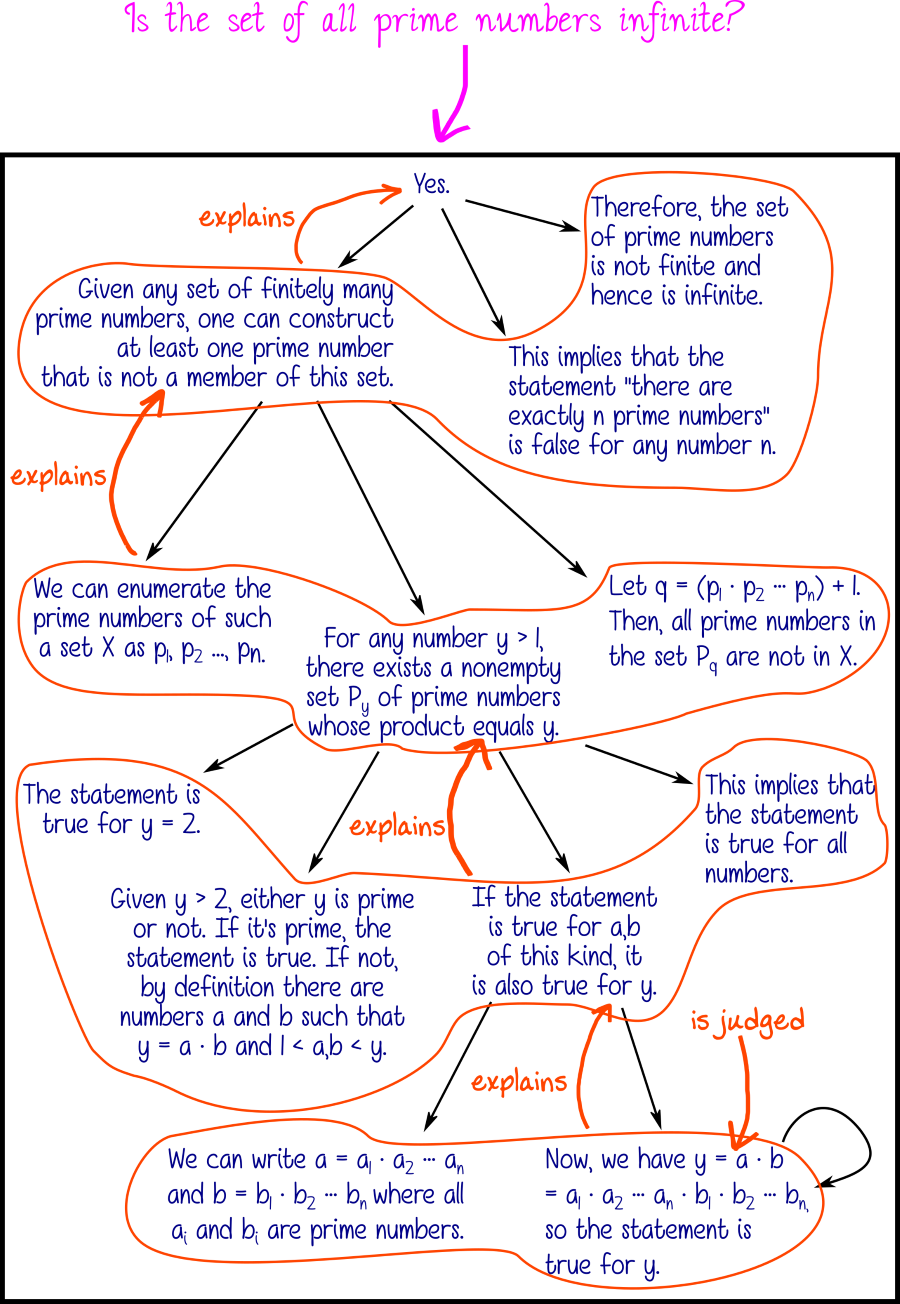 You can also look at the uncluttered version.

A clarification: statements are not strings. By itself, the string 'Now, we have y=a⋅b [...]" cannot be judged since it contains symbols whose meaning is only defined in the remaining transcript. In general, any statement may require an arbitrary amount of additional context to be understood. This means the length of its string doesn't meaningfully indicate how complex a statement is.

Despite this, the complexity of sfinal may remain relatively low. This is due to the principle we've discussed in post #-1. The better the explanations chosen by the first agent are, the less complexity there will be in each part of the argument. Ideally, the judge will only have to deal with a small part of the entire argument to verify sfinal.[8]

One of the things mathematicians like to do when studying a problem is to define the space that one is working in. For example, in machine learning, one usually decides on a space of possible models before beginning the search. Consequently, we would now like to define a space and say that HCH and Ideal Debate are about doing stuff within this space. I will call this a Cognition Space.

As mentioned above, I think it is a mistake to differentiate between 'facts' and 'implications'. The prime number transcript is an example of this: it follows from the axioms of set theory that there are infinitely many prime numbers, so technically the entire debate is only about implications, but they just feel like regular statements. For this reason, we will take 'statement' to be a primitive and define a Cognition Space to be a pair

where Sh is a set of statements, and dh:Sh→R+ a function assigning each statement a difficulty. On this, several points.

We now turn to Ideal Debate in particular. Given the definitions above, we define a path through a Cognition Space (Sh,dh) to be a pair

where sfinal∈Sn[9] and for each j∈{1,...,n}, we have that Sj∈S∗h[10] and Sje→s for some s∈Sj−1; with S0:=(s0) being just the initial answer to the input question. (Recall that the fat letters denote sequences, and that the notation Sje→s is short for 'Sj is an explanation for s'.)

An Ideal Debate transcript (such as the prime number one shown above) precisely visualizes one path through a Cognition Space.[11] To make sure you're following the formalism up to this point, here's an exercise.

EXERCISE (1-5 MINUTES): If we extend dh to paths, what is the correct definition for the difficulty of a path?

The difficulty should equal that of sfinal since that's the only statement the judge needs to verify.

Ideal Debate traverses a Cognition Space by having the two agents collectively choose a single path that starts at an answer s0 to the input question and ends at some statement sfinal. If the first agent is honest (and we will assume so for this post), she will give a true initial statement (the answer to the input question) and will provide a true explanation for the previous statement at every step of the game. The second agent will, presumably, try to navigate to the most difficult part of the argument, hoping that the judge will fail to verify sfinal. (The second post will look into this a lot more.)

Conversely, a node in an HCH tree is initialized with a question, which she will attempt to answer while using subtrees to answer related questions. If she succeeds at this, then she must consider [the set of (question, answer) pairs she has exchanged with subtrees plus whatever cognitive work she's done herself] to be an explanation for the answer. (Otherwise, she risks returning an answer that isn't true.)

Thus, explanations[12] are key in both cases; however, the purpose of the explanation is different:

Put differently, Ideal Debate (if the first agent is honest) is analogous professor deciding which statements most cleanly demonstrate that such-and-such is the answer to a particular question, whereas HCH is analogous to a student trying to figure out how to answer the question in the first place, and asking subquestions to help with that. The difference between the resulting decompositions will vary – we can imagine questions where it is nonexistent, such as

In this case, we may end up with transcripts that look like this or this (with the usual disclaimers about hidden elements); they're functionally identical. But it's not hard to imagine cases where the difference is substantial. In fact, you need only take the prime number transcript above to have an example; without knowing the proof, many people would not think to ask, 'given any set of finitely many prime numbers, can you use them to construct a new prime number?', which means that an HCH transcript for the same question would look differently.

Let's take a shot at formalizing this difference. Recall our cognition space (Sh,dh). Given some statement s∗, the space implicitly represents the tree of all possible explanations for s∗. It looks something like this:

Formally, write Explanations(s) to denote the set of all possible explanations in for s that exist in dh. (This set has precisely as many members as there are implication statements of the form “⟨arbitrary sequence⟩ imply s.”) We can now define our requirement that Ideal Debate agents be 'maximally powerful' as the ability to search through all members of Explanations(s). In this setting, the first agent will pick the one that will lead to the easiest possible path, given the adversarial nature of the second agent. (Again, we will look into this more in the second post.)

HCH is much harder to formalize, but for now, we can crudely model the limitations that come with not knowing the answer as the ability to

Here's another exercise to make sure the formalism is clear.

EXERCISE (3-8 MINUTES): Suppose a node in HCH succeeds in answering a question if she finds an explanation (s1,...,sn+1)∈Explanations(s0) such that ∑n+1j=1dh(sj)≤100, where s0 is the correct answer to the input question. Suppose further that she can search through a hundred elements (randomly chosen) in Explanations(s0) to find such an explanation. Come up with a toy example where this would likely lead to her failing to derive s0, even though a simple explanation does exist. To do this, define a full cognition space (Sh,dh).[13] You can choose arbitrary values; they need not correspond to anything real.

Increase n to make it arbitrarily unlikely for the human to find an explanation.

The prime number example shows that there are real cases where the difference is significant, and the formalism agrees.

So – an HCH tree whose human only has high school knowledge about math would not immediately guess the most elegant proof. Fortunately, it doesn't have to. HCH has a massive computational budget, so if it goes in a fruitless direction first, that's still fine, as long as it finds a correct proof eventually. Would it do that?

However, it certainly isn't obvious that deriving a mathematical proof has the same asymptotic difficulty as understanding it, which is what it means to say that Factored Cognition is guaranteed to either work for both stock IDA and Debate or neither.

We can thus end this post on our first conjecture:

Decompositions are an essential part of any Factored Cognition scheme, and changing how they are chosen is entirely allowed to change how the scheme scales to harder problems.

In the next post, we'll see how much we can do with the formalism. This will not be conclusive, which is why we will then switch gears and turn to the human component.