The most popular theory is called "primordial soup". The basic idea is that organic molecules (which just means chemical compounds with carbon-hydrogen bones) formed from natural physical processes and then some of those organic molecules randomly organized themselves into RNA and then that RNA built itself a cell. Bam.

The primordial soup theory is implausible from a physics perspective due to thermodynamics.

Living cells are at disequilibrium with their environment. They must harvest negentropy from an external source in order to stay alive. This isn't a property life happens to have. It's the essence of what life is. Life that isn't harvesting negentropy isn't alive.

For life to exist it needs a barrier between its ordered self and its chaotic environment. Life on Earth uses a cell wall composed of a lipid membrane. Since the inside of the cell is ordered and the outside is chaotic, there is an entropy gradient across the cell wall.

Here's where the primordial soup theory becomes implausible. A primordial soup is at chemical equilibrium. A cell is at chemical disequilibrium. Could a primordial soup form a cell? Sure, in the same sense that all the atoms in my body could quantum teleport themselves to the Restaurant at the End of the Universe. "Things randomly happened to violate thermodynamics" is so statistically unlikely it should be the last resort we fall back upon after every conceivable hypotheses fails.

The Vital Question by Nick Lane provide a theory of the origin of life that is physically plausible.

Cellular biology textbooks spend a lot of time on:

The most important chemical reaction is the synthesis of ATP. It would not be an exaggeration to say ATP powers life. ATP is manufactured by harvesting energy from a proton gradient across a membrane.

There are three domains of life: bacteria, archaea and eukaryotes. The first eukaryote formed when an archaea formed a symbiotic relationship with a bacterium. If the primordial soup theory is correct then there is must be a single origin of life. Bacteria or archaea must have a common ancestor. We call it LUCA (Last Universal Common Ancestor).

But there are some mysteries. Membranes are made of lipids. Part of a lipid is made of glycerol. All archaea/bacteria use their respective lipids and their respective glycerol. Evolution is messy. It never replaces something that thoroughly. If one was replaced by the other then we should see some intermediate organisms. The fact that we don't is is evidence archaea/bacteria lipids and glycerol were never replaced. If the membranes they were never replaced then bacteria membranes arose independently from archaea membranes.

But if one type of lipid was not physically replaced with another, then what kind of membrane did the common ancestor actually possess? It must have been very different from all modern membranes. Why?…Even putting aside the question of what type of membrane it was, there is again the issue of disturbing early sophistication. In modern cells, chemiosmotic coupling only works if the membrane is almost impermeable to protons. But all experiments with plausible early membranes suggests that they would have been highly permeable to protons. It's extremely difficult to keep [protons] out…it's a classic chicken and egg problem. What's the point of learning to pump protons if you have no way to tap the gradient? And what's the point of learning to tap a gradient, if you have no way of generating one?

Starting with proton gradients solves the chemical disequilibrium problem too.

You know those black smokers with the anemones, tube worms and the giant clams? They rely on photosynthesis. Not directly, of course. No sunlight makes it down to the bottom of the ocean. Instead, they react hydrogen sulphide (H₂S) with oxygen (O₂). That oxygen comes from photosynthesis. 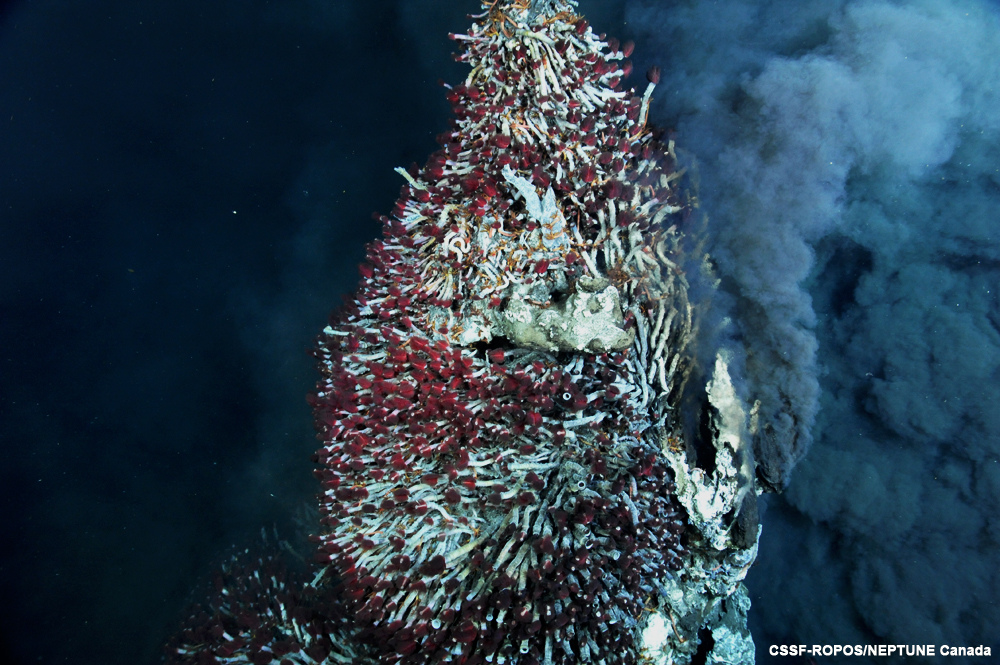 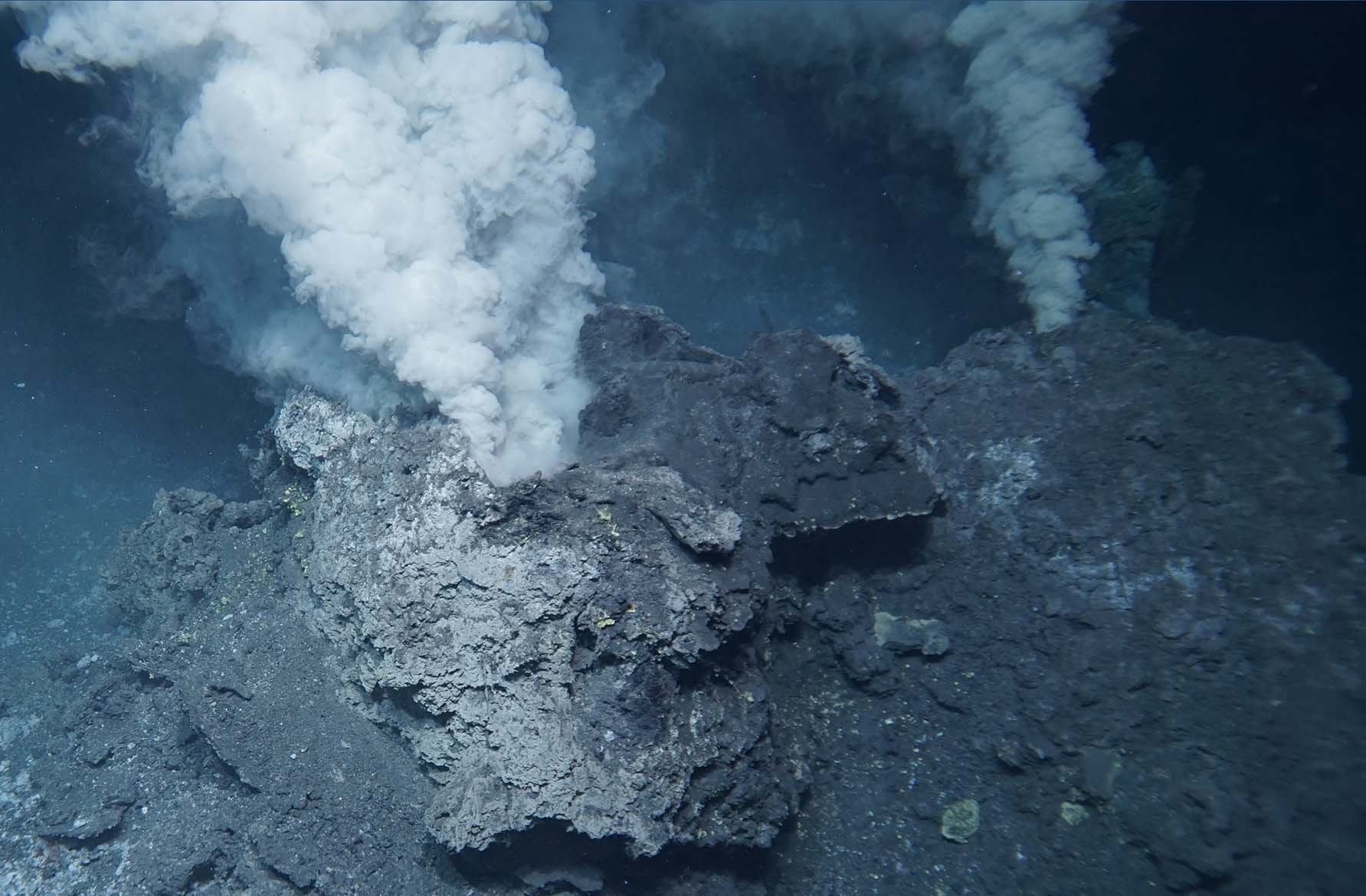 They are not superheated, but warm, with temperatures of 60 to 90°C. They are not open chimneys, venting directly into the sea, but riddled with a labyrinth of interconnected micropores.

Thermal currents through microporous labrynths have a remarkable capacity to concentrate organic molecules (including amino acids, fatty acids and nucleotides) to extreme levels, thousands or even millions of times the starting concentration, by way of a process known as thermophoresis. This is a little like the tendency of small items of laundry to accumulate inside a duvet cover in the washing machine. It all depends on kinetic energy. At higher temperatures, small molecules (and small items of laundry) dance around, with some freedom to move in all directions. As the hydrothermal fluids mix and cool, the kinetic energy of the organic molecules falls, and their freedom to dance around diminishes (which is what happens to socks inside the duvet cover). That means they are less likely to leave again, and so they accumulate in these regions of lower kinetic energy.

So that's why my laundry accumulates in the duvet cover!

Lipids self-assemble into membranes. These membranes naturally form inside the tiny pores like soapy water on a bubble blower. One side of the membrane is exposed to water in contact with the alkali ovaline rock. The other side is exposed to the water. This creates a proton gradient behind which there are concentrated organic molecules.

There's no oxygen yet. Instead of reacting hydrogen sulfide with oxygen, proto-life could react hydrogen (H₂) with carbon dioxide (CO₂) to form methane (CH₄). At any given pH, it's impossible to for life reduce CO₂ with H₂. But a membrane doesn't have just a single pH. It has a different one on each side of the membrane.

Nick Lane proposes that LUCA was a membrane capped pore in an olavine rock. Nick Lane even makes specific predictions about which biological machinery LUCA did and din't have.

LUCA really was chemiosmotic, with an ATP synthase, but really did not have a modern membrane, or any of the large respiratory complexes that modern cells use to pump protons. She really did have DNA, and the universal genetic code, transcription, translation and ribosomes, but really had not evolved a modern method of DNA replication.

Nick Lane practices epistemic rigor by not speculating beyond his area of expertise.

I am not concerned in this book with the details of primordial biochemistry: where the genetic code came from, and other equally difficult problems. These are real problems, and there are ingenious researchers addressing them. We don't yet know the answers. But all these ideas assume a plentiful supply of reactive precursors.

We now have LUCA established over a proton gradient. But we still have the chicken-and-egg problem of proton-impermeable membranes and hydrogen pumps. Which came first? Nick Lane guesses it was a Na⁺/H⁺ antiporter.

An antiporter is like a turnstile to a building which lets exactly one person into a building for every person which leaves except instead of people it operates on ions. A Na⁺/H⁺ antiporter lets in one sodium ion for every hydrogen ion it lets out and one hydrogen ion in for every sodium ion it lets in. If there is more hydrogen on one side of the membrane, a Na⁺/H⁺ antiporter acts as a hydrogen-powered sodium pump[1]. Sodium is much bigger than hydrogen. It's easy to evolve a sodium-impermeable membrane. The sodium gradient can drive metabolic reactions. Once you have all this machinery set up, a proton-impermeable membrane evolving naturally.

The Na⁺/H⁺ antiporter theory predicts that our oldest enzymes (those found in both bacteria and archaea which make DNA and RNA work) will be optimized to work at low sodium concentration even though the oceans have been high in sodium since life originated―and this is exactly how modern biochemistry works.

Methanogens are archaea. Acetogens are bacteria. They have different acetyl CoA pathways going all the way back to LUCA. Nick Lane proposes they evolved proton pumps independently. To cut to the chase, one of them pumps H⁺ into the cell for one biochemical reason; the other pumps H⁺ out of the cell for another biochemical reason[2]. This has various downstream effects―some random (like the handedness of glycerol), others logical.

We end up with two kinds of cells descended from LUCA: bacteria and archaea. They both rely on DNA but their membranes, cell walls and DNA replication are very different.

The book goes downhill[3] from there. The rest of the book isn't bad. In fact, it's a pretty great introduction to cellular biochemistry approachable to laypeople even though it's full of of technical detail. This post-eukaryote evolutionary theory is neither new nor controversial so I'll just give a quick summary.

Eukaryotes formed when an archaeon consumed a bacterium, forming a symbiotic relationship. The symbiotic organism is called an eukaryote and the bacteria inside it are is called mitochondria.

Mitochondria provide a eukaryote's ATP. Why shouldn't a eukaryote create its own ATP? Nick Lane thinks the reason is because genes have to be close to a cell membrane in order to make ATP. The square-cube law means that a cell's membrane grows slower than its volume. A big archaeon is limited in how much ATP it can create which limits how many genes it can have which limits its complexity.

Among the three domains of life, eukaryotes are the most complex. By offloading ATP production to mitochondria, they get around the square-cube law limiting ATP production. They can have more genes which enables more complexity.

Once you have eukaryotes, sex becomes very important. Nick Lane has a chapter on sex too. It's interesting and if it was written in any other book I'd say "this is top-tier science writing" but Nick Lane sets the bar of so impossibly high by proposing a fascinating new theory to one of the most important questions in all science that merely "top-tier science writing" is a step down. He gives a testable hypothesis about "what causes ageing" backed up by diagrams and evolutionary theory. For most science writers, that would be the entire book. To Nick Lane, it's ancillary.

The coolest thing about The Vital Question is it makes precise predictions about what life on other planets might look like. We may not ever get to test this theory ourselves but―perhaps―eons from now, some descent of humankind will stumble across infant alien life, load this book from its Most Ancient Archives and find out whether Nick Lane was right.

This post was funded by Less Wrong. Thank you!