The challenge is this: given a closed physical system, if I point to a region and tell you that knowledge is accumulating in this region, how would you test my claim? What are the physical characteristics of the accumulation of knowledge? We do not take some agent as the fundamental starting point but instead take a mechanistic physical system as the starting point, and look for a definition of knowledge at the level of physics. 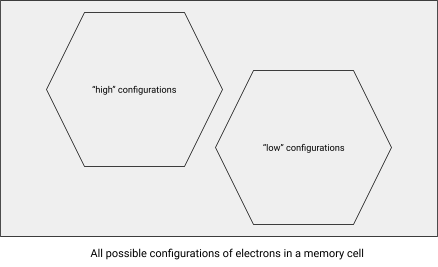 Digital abstraction layers in the genome

There are many physically distinct configurations of a small collection of carbon, nitrogen, oxygen, and hydrogen atoms. If we counted each configuration as distinct as we did in the preceding post in this sequence then the number of bits of information would be the number of yes-or-no questions required to pinpoint one particular low-level configuration. But we could also say that we are only interested in distinguishing A from C from G from T molecules, and that we are not interested in distinguishing things at any finer granularity than that, and also that we are not interested in any configuration of atoms that does not constitute one of those four molecules. In this case our high-level system encodes two bits of information, since it takes two yes-or-no questions to distinguish between the four possibilities.

In case it’s not visible in the truncated gif above, each of the high-level "cells" in this construction is actually a region consisting of many thousands of low-level cells of a much finer-grained version of Conway’s Game of Life. The fuzzy stuff between the cells is machinery that transmits information between one high-level cell and its neighbors in order to produce the high-level state transitions visible in the animation. That machinery is itself an arrangement of gliders, glider guns, and other constructions that evolve according to the basic laws of Life that are running at the lowest level of the automata. It is a very cool construction.

Suppose now that I take the high-level configurations of this system to be the pattern of "on" and "off" cells in the zoomed-out game board, and that I group all the possible low-level game states according to which high-level game state they express. (That is, if two low-level configurations appear as the same arrangement of on/off game cells at the zoomed-out level, then we group them together.)

Perhaps we can define knowledge as mutual information between the high-level configurations of a digital abstraction layer contained within some region and the low-level configurations of the whole system. This definition encompasses knowledge about the ancestral environment encoded in the genome, knowledge recorded by a computer, and knowledge stored in synapse potentials in the brain, while ruling out difficult-to-retrieve information imprinted on physical objects by stray photon impacts, which was the counterexample we encountered in the previous post.

This also helps us to understand what it means for an entity to accumulate self-knowledge: it means that there is an increase over time of the mutual information between the high- and low-level configurations of that entity. A computer using an electron microscope to build a circuit diagram of its own CPU fits this definition, while a rock that is "a perfect map of itself" does not.

But what about a computer that merely records every image captured by a camera? This system has at least as much mutual information with its environment as one that uses those observations to build up a model of its surroundings. It is reasonable to say that a data recorder is accumulating nonzero knowledge, but it is strange to say that exchanging the sensor data for a model derived from that sensor data is always a net decrease in knowledge. If I discovered that my robot vacuum recorded its sensor data to some internal storage device I might be mildly concerned, but if I discovered that my robot vacuum was deriving sophisticated models of human psychology from that sensor data I would be much more concerned. Yet a mutual information conception of knowledge seems to have no way to account for the computational process of turning raw sensor data into actionable models.

It is not clear whether digital abstraction layers have a fundamental relationship with knowledge. It does seem that information must be useful and accessible in order to precipitate the kind of goal-directed action that we seek to understand, and digital abstraction layers are one way to think about what it means for information to be useful and accessible at the level of physics.

Previous:
Knowledge is not just mutual information
6 comments27 karma
Next:
Knowledge is not just precipitation of action
2 comments21 karma
Log in to save where you left off
Mentioned in
19David Wolpert on Knowledge
18The inescapability of knowledge
New Comment
2 comments, sorted by
top scoring
Click to highlight new comments since: Today at 10:00 AM
[-]Adam Shimi2y 2

What I take from the sequence up to this point is that the way we formalize information is unfit to capture knowledge. This is quite intuitive, but you also give concrete counterexamples that are really helpful.

It is reasonable to say that a data recorder is accumulating nonzero knowledge, but it is strange to say that exchanging the sensor data for a model derived from that sensor data is always a net decrease in knowledge.

Definitely agreed. This sounds like your proposal doesn't capture the transformation of information into more valuable precomputation (making valuable abstraction requires throwing away some information).

These are still writing that I drafted before we chatted a couple of weeks ago btw. I have some new ideas based on the things we chatted about that I hope to write up soon :)