Polysemanticity and Capacity in Neural Networks

Elhage et al at Anthropic recently published a paper, Toy Models of Superposition (previous Alignment Forum discussion here) exploring the observation that in some cases, trained neural nets represent more features than they “have space for”--instead of choosing one feature per direction available in their embedding space, they choose more features than directions and then accept the cost of “interference”, where these features bleed over into each other. (See the SoLU paper for more on the Anthropic interpretability team’s take on this.)

We (Kshitij Sachan, Adam Scherlis, Adam Jermyn, Joe Benton, Jacob Steinhardt, and I) recently uploaded an Arxiv paper, Polysemanticity and Capacity in Neural Networks, building on that research. In this post, we’ll summarize the key idea of the paper. 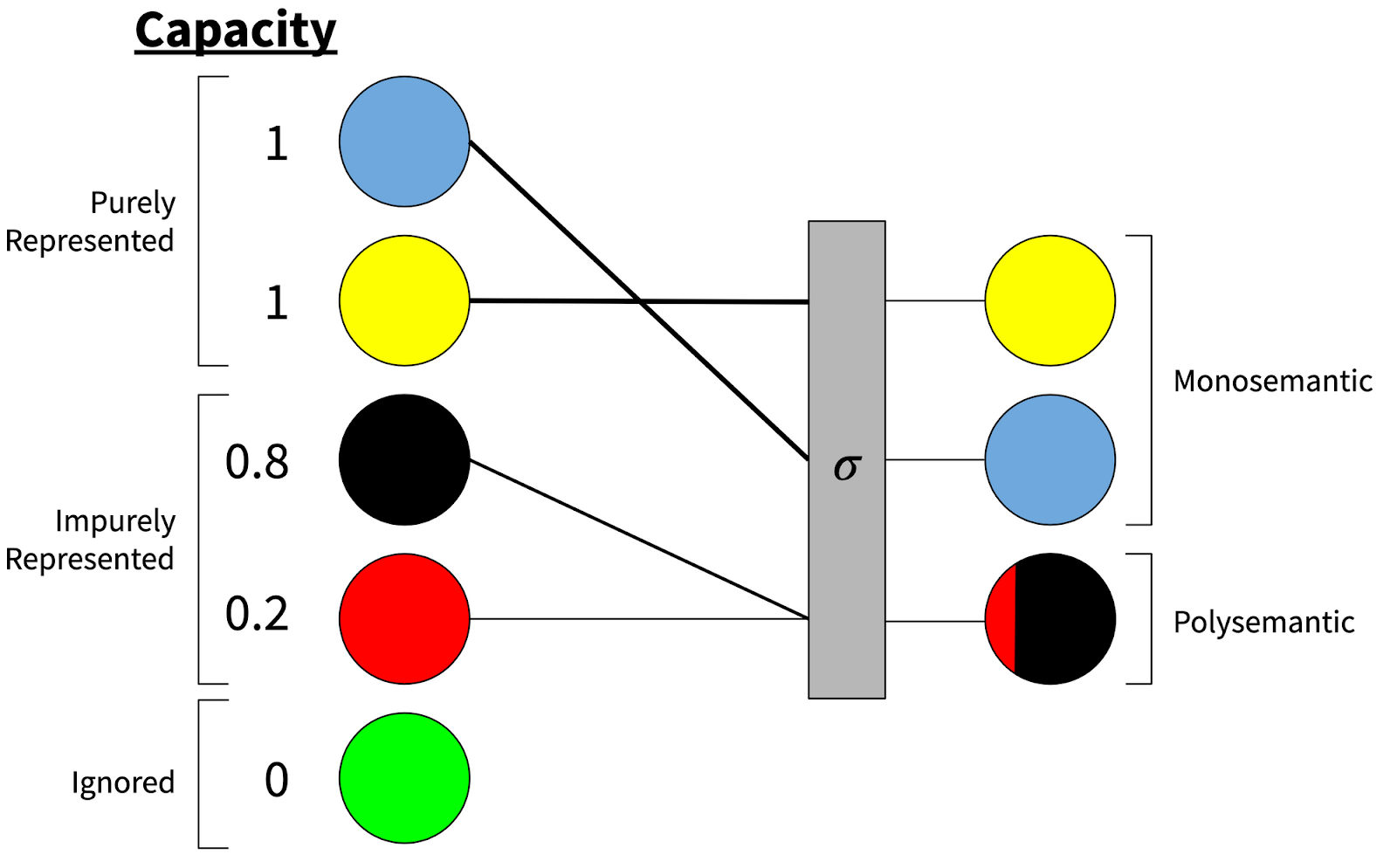 Now, we can make the observation that, like in any budget allocation problem, if capacities are allocated optimally, the marginal returns for allocating capacity to any feature must be equal (if the feature isn’t already maximally or minimally represented). Otherwise, we’d want to take capacity away from features with lower dLi/dCi and give it to features with higher dLi/dCi .

In the case where we have many features with diminishing marginal returns, capacity will in general be allocated like this: 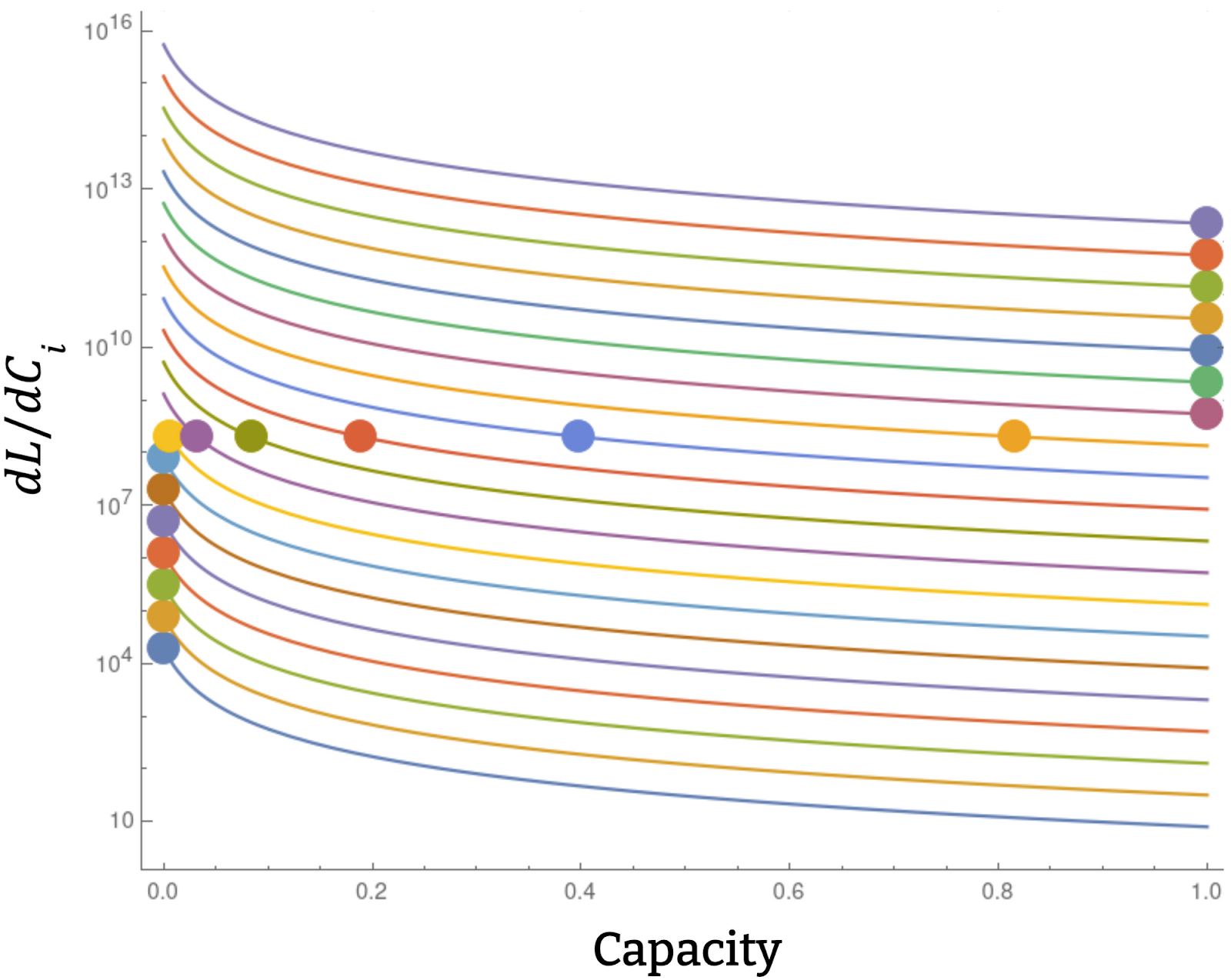 Here the circles represent the optimal capacity allocation for a particular total capacity.

This perspective suggests that polysemanticity will arise when there are diminishing marginal returns to capacity allocated to particular features (as well as in some other situations that we think are less representative of what goes on in networks).

In our paper, we do the following: 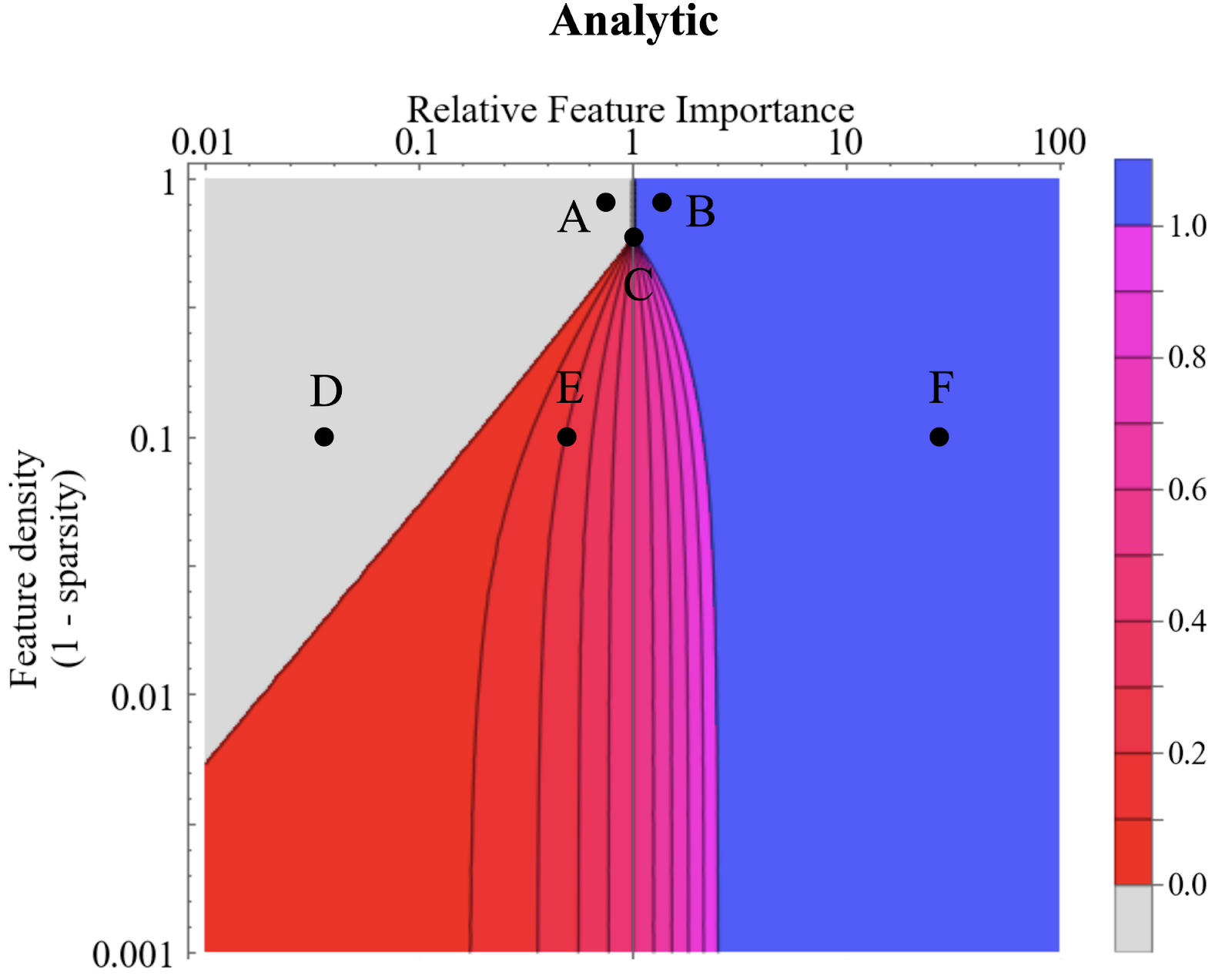 How important or useful is this? We’re not sure. For Redwood this feels like more of a side-project than a core research project. Some thoughts on the value of this work:

I wonder if there is some way to alter the marginal return curves so that they are not diminishing, and see whether that removes polysemanticity from the trained network. This seems difficult to do at the outset, because a lot of features just are going to be of somewhat diminishing marginal utility for most real-world learning problems. But I wonder if there is some way to train a network, and then, based on the trained weights, do some fine-tuning using a loss that is set up so that the marginal returns to feature capacity are non-diminishing for the particular features learned so far.

The relationship between increasing/decreasing marginal returns and polysemanticity generalizes beyond our toy model. However, we don't have a generic technique to define capacity across different architectures and loss functions. Without a general definition, it's not immediately obvious how to regularize the loss for increasing returns to capacity.

You're getting at a key question the research brings up: can we modify the loss function to make models more monosemantic? Empirically, increasing sparsity increases polysemanticity across all models we looked at (figure 7 from the arXiv paper)*. According to the capacity story, we only see polysemanticity when there is decreasing marginal returns to capacity. Therefore, we hypothesize that there is likely a fundamental connection between feature sparsity and decreasing marginal returns. That is to say, we are suggesting that: if features are sparse and similar enough in importance, polysemanticity is optimal.

*Different models showed qualitatively different levels of polysemanticity as a function of sparsity. It seems possible that tweaking the architecture of a LLM could change the amount of polysemanticity, but we might take a performance hit for doing so.

Thank you for this work. How feasible would it be to replicate these results using large neural networks (but still using synthetic training data where you can control feature sparsity directly)? What then would be the path to determining whether networks trained on real-world datasets behave according to this model?

In both ideas I'm not sure how you're identifying features. Manual interpretability work on a (more complicated) toy model?

You write down an optimization problem over (say) linear combinations of image pixels, minimizing some measure of marginal returns to capacity given current network parameters (first idea) or overall importance as measured by absolute value of dL/dC_i, again given current network parameters (second idea). By looking just for the feature that is currently "most problematic" you may be able to sidestep the need to identify the full set of "features" (whatever that really means).

I don't know how exactly you would formulate these objective functions but it seems do-able no?

Oh I see! Sorry I didn't realize you were describing a process for picking features.

I think this is a good idea to try, though I do have a concern. My worry is that if you do this on a model where you know what the features actually are, what happens is that this procedure discovers some heavily polysemantic "feature" that makes better use of capacity than any of the actual features in the problem. Because dL/dC_i is not a linear function of the feature's embedding vector, there can exist superpositions of features which have greater dL/dC_i than any feature.

Anyway, I think this is a good thing to try and encourage someone to do so! I'm happy to offer guidance/feedback/chat with people interested in pursuing this, as automated feature identification seems like a really useful thing to have even if it turns out to be really expensive.